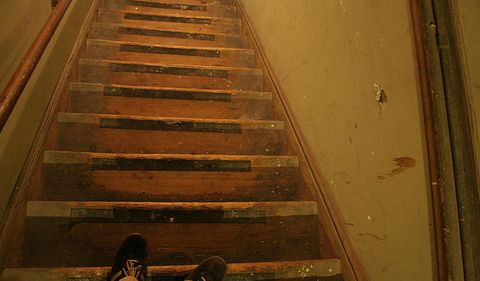 Had I not gone into ordained, priestly ministry, I might have made an incredible, professional worrier. I’m not even kidding—I worry almost as often as I breathe. Okay, I may be overstating this point, but my imagination is a powerful thing, and when it decides to worry about something or someone, it comes up with some pretty scary stuff.

When Antonio and I watched the first season of FX’s American Horror Story, I literally did not walk down into our creepy, cobweb-ridden basement for an entire month. I still look behind me as I ascend the staircase after doing laundry (Antonio’s glad that I chip in with that every now and then). The point is, most of the worrying I do is utter nonsense, and it doesn’t do anything except waste time and energy.

Our psalmist is a bit of a worrier too, I’m afraid.

We’ll call our psalmist Davy (and we’ll use our best Christian Bale Newsies accent to do it). Davy begins sharing his worries with a statement of affirmation about the Lord. “The Lord is my light…my salvation…the stronghold of my life…of whom shall I be afraid.” But Davy’s psalm doesn’t stop there, and after we read his concerns, we realize that the affirmation is like when I walk up the stairs from the basement and tell myself, “there is no deranged monster hiding behind the furnace…there is no deranged monster hiding behind the furnace…”

“When evildoers assail me to devour my flesh…though an army encamp against me…though war rise up against me…if my father and mother forsake me...” Davy has just named some concerns that King David might have had, though the concerns got very personal—so personal and so universal that the psalm becomes more relatable than the absurdity of the first examples. We’re not all powerful leaders worrying about armies and war…we certainly don’t worry about evildoers eating our flesh, except when we’re in a creepy basement.

THAT, my friends, is the struggle that each and every one of us (and them) live through—it is a lifetime search for meaning and relationship with God. It is with conviction that we, and Davy, search for divine guidance and protection, and when we find ourselves in times when fear overwhelms faith, THAT is when the importance of community is most obvious. Community is essential in life and in asking these kinds of questions—whatever role(s) we play in communal life.

So worry on, but move forward. Be afraid of things that (probably don’t) creep in the basement, but keep on doing your laundry.