In this new series, we get to know members of St. James’s a little better by asking them about how they came to be part of the community and how their faith informs their daily life and work.

Abby Fisher Williamson’s work researching local responses to immigrants is grounded in empirical data, but her faith informs her passions for love, justice, and equality.

Since 2003, Abby’s interest in immigrant incorporation—the ways in which local communities respond to culturally differing newcomers—inspires her extensive research into the subject. She has the year off from teaching political science and public policy at Trinity College, Hartford in order to wrap up some of her research. “Some people call it a sabbatical,” Abby says, “some call it research leave, and most people when they hear that think, ‘Oh, you have the year off!’ (laughter). Actually what it means is that I have a book deadline in April.”

Using case studies in places like Lewiston, Maine; Wausau, Wisconsin; and Yakima, Washington, Abby finds that by nearly any measure, immigrants are incorporating successfully. In the long-term, they bring vitality and development to societies, so the question is how to minimize short-term growing pains in order to maximize long-term benefits. When local communities experience influxes of immigrants, there are certain conditions that allow for better interaction between the immigrants and those residents who were there prior to the immigrants’ arrival. 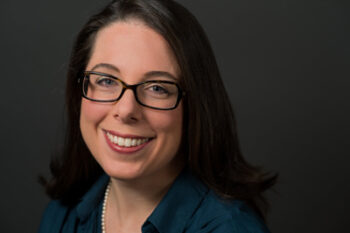 “Those conditions can be hard to achieve,” Abby says, and her interest in is identifying how to make both sides of the equation work. Ideal conditions include fostering a level playing field, which is difficult with immigrants from vastly different cultures and varying resource needs. They also include gaining the endorsement of authority figures and creating collaborative projects in which settled residents work with immigrants on a common goal. “A lot of what I’m writing about is the ways communities can think about doing this work creatively.”

One obvious setting in which these goals are more easily achieved is in the classroom. Abby says that teachers can establish the kinds of conditions where contact between these groups can create the suspension of stereotypes and future collaboration. “If you have a group of kids in a classroom, they are—at least to some extent—on the same level; they are all third graders. And then you have the teacher endorsing the idea that interacting with one another and treating each other fairly is important. And then you have the teacher developing ways in which they can reach shared goals together.”

“It’s much more difficult among adults,” Abby says. “Adults have few places where they come together where they are on an even playing field. Faith communities are communities that could serve this purpose, and in some cases are serving this purpose. A Roman Catholic church in Norristown, PA is a great example. Since Norristown has become home to a large Latino population, St. Patrick’s has found ways to include parishioners from all walks of life in Mexican and Irish cultural celebrations, through the commonality of shared faith traditions.”

Abby’s parents raised her in Congregational churches in New Hampshire and Ohio, though her father’s roots were firmly Episcopal. They attended every Sunday and sang in the choir; her parents were involved in other church activities. In her late adolescence, Abby stopped attending church regularly but later—in her twenties—became part of Grace Episcopal Church in Medford, Massachusetts.

It was around this time that her entire family left the church.

When her much younger brother hit his adolescence and began resisting any involvement in a faith community, a minister visited their house to answer questions; their parents hoped that the conversation would lead to Abby’s brother’s confirmation. Instead the discussion swayed Abby’s brother and mother to cease their involvement with church altogether.

“I think that growing up in a faith community where there was a community of adults that I knew, that I saw every Sunday, and that were working to do good in the world…seeing that as a child, I am certain, shaped my own interest in wanting to make a difference in the world—wanting to contribute…It shaped my sense of justice and fairness.”

Abby’s work as an academic requires that she deal with empirical data, whether or not her findings promote what she thinks would be good for the world. “It’s not that my faith shapes the recommendations that I write about, but it does shape my desire to have a more just world.”

Sam Paul - A Hand Up