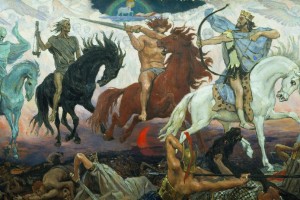 Today at St. James’s begins a study on The Revelation to John, commonly referred to as “Revelations,” though in fact it is a singular “Revelation.”

It sounds like an unimportant point, but for me it’s like when people refer to Subway as “Subways,” as if someone named “Subway” owns the place. And it further drives me crazy when actors playing biblical scholars in television shows and films about the end times pretend to be “Experts of the Book of Revelations.”

Of course the most tragic interpretations of Revelation involve what the letter is actually known for—the idea that it is a play-by-play account of what is going to happen at some point in the future. Revelation is just as much about things that have already happened and are currently happening as it is about specific events that will happen. And it was written by a person who perhaps had witnessed the devastating and violent destruction of Jerusalem and the Temple there within—a horrific and fiery affair…

…unfortunately, his letter has been picked up and reinterpreted over and over again over the last two millennia.

We have this funny tendency of jumping to the conclusion that we’re looking at the world with the right and only lens (guilty); ours is the only perspective on reality. I think that we’ve often done the same thing to Revelation, believing that the beasts, the fires, and all of the other images point to specific events at specific points in time, or conversely believing that the letter is irrelevant nonsense.

I don't have the "right" lens, and neither do you. My not-so-humble opinion is that the revelation is meant to identify with the chaos already present in the world and the chaos to come, and then (most importantly) to give hope to the recipients of the letter that in the end, God wins and overcomes even the most devastating evils in the world.

God wins, and not only that, God cares.

This is the promise of The Revelation to John; it is a hopeful message to the persecuted (and kind of a giant middle finger to the Romans, who were the object of John’s anger in much of the imagery).

Perhaps it really is all about the end times; no matter what you believe, you are welcome to share those beliefs and to challenge them as we delve deeper into the letter and hopefully discover that it is richer than we had previously imagined.

Today was our first session of the study on The Revelation to John. Next Wednesday we’ll really dig into the text and our accompanying book. Join us next Wednesday at noon, won’t you? Maybe we can reclaim Revelation and help turn all of the fear and trepidation into a whole lot of hope.