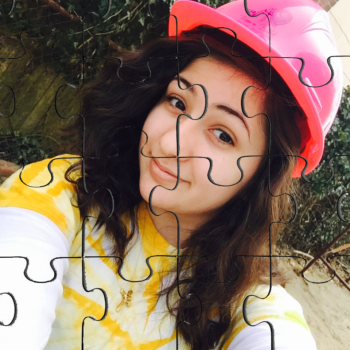 In this series, we get to know members of St. James’s a little better by asking them about their lives, how they came to be part of the community, and how their faith informs their daily life and work.

Melina Dezhbod knows life of a refugee, having fled Iran as a child with her family.

During the year or so they spent in Turkey, “A bad earthquake struck, and in the midst of everything, I thought that the world was mad at us. I could sense my parents’ fear, and I knew that something wasn’t right about the situation.”

Her father, a devout Christian then known for baptizing fellow Iranians, had become the target of persecution against Christians. He and Melina’s mother found it necessary to flee, so after escaping to Turkey, they made their way to the United States with the help of an Episcopal parish in Woodbury, Connecticut.

“The church helped a lot with the whole process and made it much easier for us to acclimate,” Melina says, which is probably why she seems so passionate about helping other people today.

Melina currently studies at the University of St. Joseph in West Hartford; when she finishes her Bachelor’s Degree in Social Work next year, she plans on continuing to earn her Master’s Degree as well. Her ultimate aspiration, however, is priesthood in the Episcopal Church.

Melina’s father became an episcopal priest in 2013 and serves at St. Paul’s in Woodbury, the same church that helped them enter the United States. Until that point, Melina had participated in many aspects of church life—Sunday school, food drives, Jesus birthday parties, and her confirmation, which coincidentally happened at St. James’s. However, it was at her father’s ordination service that Melina began to get a sense of her calling. This is when she says she “took control” of her spiritual journey.

Melina says that her calling is grounded in her passion for interfaith dialogue—she actively seeks out friendship with peers of all religious backgrounds and practices, seeking opportunities to listen and learn from one another. “One of the main things that I have learned from these relationships is that even though we have differences in how we do religion, we all have something in common: the peace and the love that we want to spread into the world.”

And Melina spends much of her time spreading that peace and love. Whether she is facilitating a discussion group on grief and loss with residents at Seabury in Bloomfield or working as a resident assistant and sophomore outdoor adventure resident peer at St. Joseph’s, Melina actively seeks to be a source of support within every community she touches.

“We all have a story,” she says, “and when we share our stories it is a form of service.” To Melina, sharing her story and hearing those of others allows relationships to take form and reveal more purpose. “And when we find commonalities with one another and can say, ‘I’ve been there, I made it through…’ we make a difference in each others’ lives.”

Melina’s metaphor on life is that of a puzzle—the pieces are these varied and complicated experiences; in holding and sharing those pieces, the bigger picture begins to take form. And with glowing sincerity, Melina emphasizes her faith that God upholds the bigger picture. This is from where she draws he enthusiasm and abundant joy.

That is but a piece of Melina’s story. Take an opportunity to share your story with someone. And if you haven’t met Melina, she usually attends the 9:30 service and sometimes serves as a chalice bearer.

God in My Gut