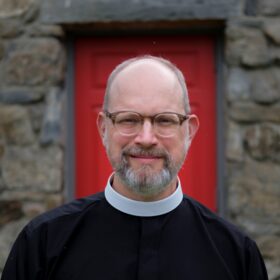 The Rev. Joseph J. Rose graduated from Yale with a Master of Divinity and a diploma in Anglican Studies. Before being called to St. James’s, Joe and his wife Heidi served as co-executive directors at Trinity Church Wall Street’s retreat center in West Cornwall, CT. At Trinity Retreat Center, his work included leading multigenerational retreats and camps, sharing in the preaching and liturgical life, and developing a creation care ministry that featured a “Good News Garden” farm and a sanctuary for rescued donkeys. He has also served at St. John's, New Haven, and received his Clinical Pastoral Education training at the VA Hospital in West Haven. He is a native of Washington State, graduated from Central Washington University with a degree in journalism, and studied abroad in Northern Ireland. Joe worked as a journalist for 23 years before discerning a call to the priesthood. Joe and Heidi reside in West Hartford and have two daughters.

All Blog Posts by The Reverend Joseph J. Rose