It makes sense that God became incarnate as a man. Not because God is one gender or the other, but because in Jesus's Palestine, a woman would not have gotten the public attention that Jesus got. A woman's wisdom, acts of compassion, and miracles would likely have been noticed only by her immediate family and community, and not written down. If God meant to change the world through Jesus, then God needed people to pay attention. And for most of human history, women have been nearly invisible, doing the steadfast work of caring for home and family far out of the spotlight.

We are fortunate to live in a time and place where women are no longer invisible, where women's work and wisdom get some public attention. At least, our work gets public attention if it is work done in public. The work of tending home and children (and elderly parents and pets and so much more), whether done by women or men, remains undervalued by the world (including the church). 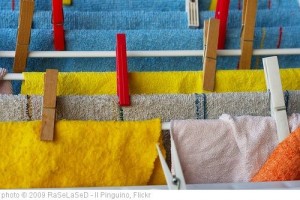 In her wonderful little book, The Quotidian Mysteries: Laundry, Liturgy, and "Women's Work," Kathleen Norris ponders how housework can be a spiritual discipline, drawing us out of our solitary sloth, mirroring God's work of making order out of chaos, and drawing our attention to "the sacramental possibilities in all things." Noting that garbage collectors usually earn more than day-care workers, Norris writes that because housework, including care of children, "is so important, so close to us, so basic, so bound up with home and nurture, it is considered to be of less importance than that which is done in public."

When, in my 20s, it became clear (as clear as such things can be, anyway) that God was calling me to become a mother, I was embarrassed. Daniel and I attended a church where people did Big Things for Jesus. These Big Things were public, outward, rooted firmly in matters of policy and social justice and our urban milieu. People gave up traditional medical practices to provide care for homeless men, gave up suburban homes to live in the local L'Arche community (a group house in which people with developmental and cognitive disabilities live with their caregivers), gave up health insurance in solidarity with those who didn't have a choice about going without it. I was embarrassed that God seemed to be calling me to such a little thing, to the mundane dailyness of bearing and raising children. It would be many years before I would read Kathleen Norris's assurance that, "The Bible is full of evidence that God's attention is indeed fixed on the little things."

What would Christian practice look like if God had become incarnate as a nursing mother instead of a single guy? Perhaps we would understand that those who pace in the night with a colicky baby embody sacrificial love as much as those who toil on behalf of the world’s sick and poor. Perhaps we would know that muddled, exhausted prayers whispered before sleep are just as good as eloquent prayers said on one’s knees in a solitary hour. Perhaps we would understand that, in giving ourselves fully to the "little things" of family and home (which are, of course, not so little in all kinds of ways), we get "hands-on experience of transformation"—the transformation that God is working in us, and that we in turn are working in the world.