Home > Blog > A Mother's Call to Care About Other People's Children

Sally Hunsberger used to think that as her children grew into more self-reliant teens, she would feel less conflicted about her regular trips to the West Bank as a volunteer with Christian Peacemaker Teams (CPT). Throughout her 12 years as a CPT volunteer, Hunsberger has wondered if putting herself in such risky situations is fair to her husband and two children, now 18 and 15. To her surprise, as her kids have gotten older, balancing these risks has not gotten any easier. She is deeply aware, every time she embarks on another CPT delegation, of the price her children would pay if something went terribly wrong.

“It’s really hard to be away from my kids,” Hunsberger explains. “The whole time I’m there I’m doing a balancing thing, thinking about safety and risk. I just know what it would do to my kids if something happened to me. I’m always trying to figure out how much of a risk to take. Last time [I was in the West Bank], things were so volatile that you couldn’t know when a conflict would erupt. Gaza and Israel were bombing each other, Palestinian homes were being demolished, and clashes between soldiers and Palestinians were happening daily in the West Bank. Tension was so high. You could be walking down the street and it would flare up. The risks we face, and what they mean for my own family, are hugely on my mind.”

But her love for her children is precisely why Hunsberger keeps going back to the West Bank with CPT. She knows that if her children lived in a place where violence could erupt any minute, where they could be confronted by soldiers any day on their way to school, she would want to know that other people cared enough to get involved.

“I go back to when I was a kid and I read about Anne Frank, and I asked myself if I would be one of the people who hid her, or would I be someone who would do nothing? I wanted to be one of the people who helped,” Hunsberger says. “Working with CPT has changed my life, and I’m glad it has. Jesus said that my life is not more important than someone else’s life. Taking care of our own families isn’t enough. I could live here in the U.S. just taking care of myself and my family, but I think Jesus was asking us to look beyond ourselves.”

So because of her faith, her passion for justice, and her empathy for children who don’t live in safety as her own do, Hunsberger leads two-week CPT delegations to the West Bank every couple of years.

CPT was founded after Ron Sider gave a speech at a 1984 Mennonite World Conference challenging Christian pacifists to “take up our cross and follow Jesus to Golgotha. We must be prepared to die by the thousands,” Sider said. “Those who believe in peace through the sword have not hesitated to die. Proudly, courageously, they gave their lives. Again and again, they sacrificed bright futures to the tragic illusion that one more righteous crusade would bring peace in their time, and they laid down their lives by the millions. Unless we . . . are ready to start to die by the thousands in dramatic vigorous new exploits for peace and justice, we should sadly confess that we never really meant what we said, and we dare never whisper another word about pacifism to our sisters and brothers in those desperate lands filled with injustice. Unless we are ready to die developing new nonviolent attempts to reduce conflict, we should confess that we never really meant that the cross was an alternative to the sword.” Christian Peacemaker Teams hired its first staff member in 1988, and began sending delegations to violence-ridden places including Haiti, Iraq and the West Bank.

In the West Bank, CPT delegations support local people, both Israeli and Palestinian, who are nonviolently working to end injustice and bloodshed in their communities. They listen to those on different sides of the conflict, and aim to simply bear witness to the daily struggles of people living under constant threat. For example, on a typical two-week trip, Hunsberger and her team will facilitate meetings with local groups, accompany Palestinian children on their walk to school or Palestinian shepherds who have to cross dangerous territory to get to their grazing land, and engage in conversation with anyone willing to talk, from Israeli soldiers to shopkeepers struggling to keep their businesses afloat when most of their customers live on the other side of the barrier wall erected by Israel.

CPT only goes to regions where they’ve been invited by a local group. “Nonviolent actions can spark spillover violence,” Hunsberger explains, “so we don’t want to put local people at risk without their inviting us to be involved. Also, it’s not our conflict. We need local people to help us understand what’s happening and what’s needed.”

Hunsberger’s love for her own children often sparks conversation and deeper connections with the people she meets. She recalls a shop owner in Hebron named Lila who has a son the same age as Hunsberger’s son. When Lila’s son was 14, he was jailed for allegedly throwing stones. “Lila told me, ‘I know my son and he doesn’t throw stones,’” Hunsberger recalls, “and I understood that, because if my son were arrested for something violent, I would say the same thing.” Lila’s son was told he would be released if he simply signed a confession for throwing stones. He refused and was jailed for three months. Upon his release, Lila sent him to live with a relative in an area with less Israeli presence, where he would be less likely to be picked up on another charge. Lila reports that her son, having been mistreated in jail, has PTSD and is very angry. “He just sounds so much like my own son, and I can imagine how I would feel if this were happening to my family,” Hunsberger says. “I just feel very close to Lila because of our sons.”

Hunsberger also strives to connect with Israeli soldiers. She understands that serving in the military is a non-negotiable fact of life for young Israelis, and senses that many of them are conflicted about their role. She wants to see beyond their uniform to the person they are, and by looking soldiers in the eye and starting conversations, also hopes they will see her as a person rather than a troublemaker.

For example, Hunsberger tells this story: “I was with shepherds, escorting them to the land they had owned for centuries. Jewish settlers would attack the shepherds when they came to graze their sheep. We would film so we could document any violence, and because settlers tend to attack less when we’re there. This time, some Israeli soldiers drove up and told the shepherds they had to leave. We asked why. They said it was because this is a closed military zone. We said no, this is the shepherd’s land and they are allowed to be there. The soldiers called for backup. This was all unfolding over several hours. I noticed one soldier, probably in his 30s, who had a ring on his finger. Many soldiers are younger than that. I figured he was married and went up to him, asking, ‘Do you have kids?’ ‘Yes,’ he answered, ‘I have two daughters. I’m a reservist and I work at a home for battered women.’ ‘So what do you tell your daughters about this situation?’ I asked. It took him a long time to answer. I’ve heard many soldiers rant about the Palestinians wanting to kill them, and wondered if this was going to be a rant. He finally said, ‘I guess I just tell them the truth.’ He seemed conflicted; that’s what I saw on his face and heard in his tone.”

She tells another story about joking with a stony-faced soldier about how he looked young enough to be her son, until he cracked a smile. They talked, and Hunsberger pointed out that while the soldiers were armed, neither the Palestinian shepherds nor the CPT team were armed and wouldn’t hurt anyone. The soldier eventually gained permission to leave, and departed with a warm admonition to Hunsberger and her team to take care. For Hunsberger, this simple exchange was an example of how, by engaging in casual conversation with soldiers, “I’ve gotten to break through and talk as people to one another.” 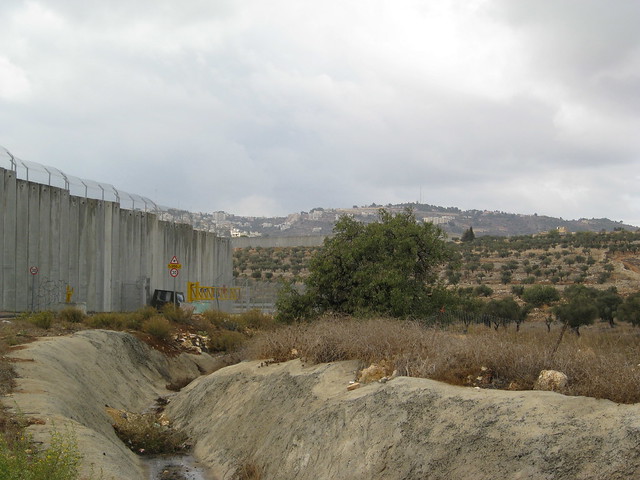 Since her first trips to the West Bank a dozen years ago, the barrier wall has gone up, and Hunsberger has seen the divisions between Israeli and Palestinian become more entrenched. “When I first started going, before the wall,” Hunsberger says, “on the boundaries where Israelis and Palestinians lived, people were still in relationship with one another. Now there’s little daily interaction other than in Jerusalem. It has become much more us vs. them, because there’s no opportunity to get to know each other.” Nonetheless, Hunsberger sees occasional examples of Palestinians and Israelis looking beyond their conflict to the human beings on the other side—Palestinians offering tea to Israeli soldiers, or soldiers offering candy to the Palestinian children they escort to school to protect them from potential attacks by settlers.

“The Israeli-Palestinian conflict is a story of two peoples who both have good historical reasons for feeling threatened,” Hunsberger observes. “They are living parallel stories, yet neither side trusts the other and both sides can begin to feel hopeless. Without hope, that’s when people turn to violence. But maybe, if soldiers and Palestinians can see each other as people first, that can change hearts. CPTers simply put ourselves in the middle of these daily situations that bring Palestinians and Israelis together, to create spaces in which people can see one another as human beings.”

As for her kids, Hunsberger’s college-aged son says that his mom’s trips have made him think more about what’s going on in the world and our responsibility to be involved. Understanding why his mom does this work, he says he is no longer afraid for her safety when she’s away. Echoing her son’s perspective, Hunsberger simply says, “You can’t live in fear. If your faith tells you this is how you have to live, then that’s how you have to live.”