Home > Blog > When We Don't Like God's Seating Chart

My "virtual" workplace was in an uproar again last week. (In the Christian blogosphere, uproars 'r us.) World Vision, a Christian nonprofit that enlists people to sponsor children in developing countries, made a surprising announcement: They would welcome employees in legal same-sex marriages. This was surprising because World Vision is a popular charity with evangelical Christians, and the organization leans right. They already required employees to practice fidelity in marriage and abstinence outside of marriage. (Don't ask me how or if they enforce that rule. I don't know.) The new rule recognized that same-sex marriage is legal in more and more places, and welcomed gay and lesbian married people alongside straight married people. World Vision spokesperson Rich Stearns said that they did not intend the new rule to endorse gay marriage. Rather, he said, World Vision recognizes a diversity of Christian perspectives on gay marriage, and also recognizes that they, as a Christian nonprofit and not a church, aren't in a position to make grand theological statements about what Christian marriage should or shouldn't be. The new rule was intended to be a narrow policy change within their organization, not a theological or moral statement on gay marriage.

Well, you can imagine how this went over with some of World Vision's more conservative supporters. One vocal far right Christian professor and blogger called their decision the "collapse of Christianity." World Vision reported getting many angry phone calls. In the first few days after the announcement, several thousand people dropped their child sponsorships. One blogger blamed gay people for the fact that poor children were losing their sponsorships. A national leader of the Assemblies of God called on everyone in his denomination to shift their support from World Vision to other charities that support a conservative Christian agenda. Progressive Christian bloggers praised World Vision's move, and called on readers to sign up to sponsor a child through World Vision, to make up for other supporters who were leaving the organization.

On Wednesday, two days after their initial announcement, World Vision announced that they had made a mistake. They reversed their policy change that welcomed employees in same-sex marriages.

But this post is less about the decisions themselves than how they made me feel about many of my fellow Christians—those at World Vision and those whose vocal opposition to same-sex marriage brought about World Vision's reversal. I was angry. And I was really, really sad. (Still am.)

I am tempted to just sever my ties with Christians whose conservative theology and morals are so different than mine. I am tempted to fling bitter accusations at those whose ideology did such damage last week, to Christian unity, to hospitality and inclusion, and to the primary Christian call to serve the poor. I am tempted to surround myself with nice progressive Christians who see things the way I do, to stop putting energy into conversation with those whose Christianity looks so different than mine. I suspect that these temptations are not mine alone. I am very proud to be an Episcopalian. I'm proud of our liturgy and prayer book, our progressive policies and radical hospitality. I assume many of you are too. And I think that our love of the Episcopal way of being Christian, combined with our bewilderment and even disgust with some other ways of being Christian, can lead us to a kind of Christian isolationism. We become uninterested in conversation with those who think and believe differently. We dismiss their theological and moral arguments out of hand. We put our heads down and do our work, our way, and pay no mind to those Christians whom we can't understand or abide.

There are certainly some who claim the label "Christian" whose actions and attitudes are so far removed from the life and ministry of Jesus Christ that we can, in good conscience, refuse to embrace them as fellow Christians. I'm thinking, for example, of Westboro Baptist Church founder Fred Phelps, who died last week. But while every movement and ideology has its share of blowhards and egotists, most Christians whose positions on gay marriage and other sociopolitical issues I find hard to accept are simply, like all of us, trying their best to follow Jesus Christ. This was most apparent to me last week when I read a 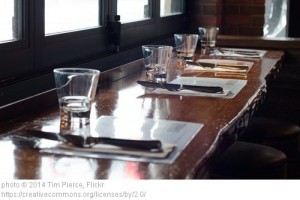 colleague's interview with World Vision's Rich Stearns after he announced the organization's reversal. Some of what Stearns said both puzzles and troubles me. But while I find Stearns's opinions and actions difficult to swallow, he's not a villain. He's a fellow Christian, trying to make decisions that are right for his organization and for our common faith. As much as I want to distance myself from Stearns and anyone who influenced and/or supported World Vision's retraction, I can't. They are my brothers and sisters in Christ. Just as we can't choose our biological family, we can't choose our Christian family. A commenter to one of my blog posts on the World Vision controversy wrote this:

All to often we forget that God calls us all to his table and that we don't get to choose who he seats us next to. No one loves you like family and no one can break your heart like family.