Here is a very helpful and hope-full post from Jason Chestnut's blog "Faith Interrupted - Looking for God in the gaps." Jason signs off on his post with what I think to be a great phrase; "Stay cool. Don't make Jesus sad".

If I had to choose one phrase to sum up my deep connection to the Jesus movement, it would probably be the ancient Christian proclamation, Jesus is Lord. (These three words are way more substantial and traditional than the current phrases Christians often point to: God bless America; One nation under God; etc...)

Jesus is Lord, for me, means that there are many things that are not - money, nations, football...and, yes, the Bible. I don't worship the Bible. It's the word of God, but it's not the only thing God ever said (in the words of my fantastic mentor and godmother, Lori).

The Left-Behind series is a fictional tale (an overwhelmingly best-selling fictional tale, but complete fiction nonetheless). It comes from a particular theology that was created around 100 years ago - an admittedly interesting concoction, composed of random pieces from Daniel, Revelation, and Paul's letter to the Christian community in Thessalonica - and has been snatched up by plenty of theologians who act as though this was handed down by God before the creation itself.

A brilliant assessment of this harmful, dangerous, and totally non-biblical theology can be found in Barbara Rossing's The Rapture Exposed. Check it.

Sorry, Westboro Baptist. I'm not talking about Levitical codes or even judgment and damnation. Show me the verse that has those words.

#5 - Everything happens for a reason.

This is often coupled with other horrific theological statements said during times of tragedy - e.g. "God must have needed another angel/flower-in-the-garden/whatever" - that simply have no biblical basis.

There is, you might say, a trajectory of God and God's people, heading towards a final future of God's commonwealth on earth - but the idea of things happening for a reason is often much more simplistic and harmful, and is often said because we don't know what else to say.

Luckily, it's not in the Bible we're fond of quoting at people.

Nope. If anything, story after biblical story shows a God whose mind is changed (Genesis 18:16-33; Exodus 32:1-14; the story of Jonah). There are also stories that go off the deep end (i.e. the entire account of the Judges), where God is seemingly nowhere in sight.

This is a difficult concept, I know. If God isn't all-powerful the way we've been taught, then what can we believe in? This is where we have to remind ourselves that our very concept of power is routinely subverted in the biblical story - most alarmingly in the story of Jesus, and his seemingly weak, powerless, and outright shameful death on the Roman version of the electric chair, the cross.

#3 - We must accept Jesus into our hearts as our personal Lord and Savior. 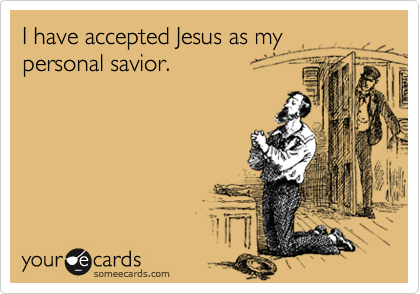 Nowhere does Jesus ask for this particular act to be done (much less say that it's necessary for salvation) - he says a lot about inviting people to follow him, but doesn't seem concerned about the act of "accepting" him into one's heart.

Plus, the idea of a "personal" Lord and Savior (as opposed to the Savior of the world, and a bringer of the community of God) is a relatively recent emphasis that coincides (in part) with the modern focus on the individual - what the presiding bishop of the Episcopal Church, Katharine Jefferts Schori, called "the great Western heresy."

Or, as the story goes, when someone asked a Catholic monk if Jesus was his personal Lord and Savior, he responded, "Nope. I prefer to share him."

Whoa, don't freak out. Walk with me for a second.

At least, this particular idea doesn't come from the mouth of Jesus himself. It's nowhere in the Gospel accounts of his life (Mark, Luke, Matthew, or John).

The closest we get are in the words of Paul (which, it's important to remember, do not encompass all that Jesus the Christ was/is/will be). In his letter to the Christian community in Rome (3:25) and his first letter to the one in Corinth (15:4), Paul wrestles with this idea (especially in the latter, where the words "Christ died for our sins" is right there, although it's followed with "in accordance with the scriptures," which begs the question - which scriptures? The Hebrew scriptures? The Gospel stories?).

There's no doubt that Jesus' death and resurrection mean so very much to those who are connected with his movement. But, this is part of a longer conversation. And worry not - we'll do our own wrestling with this idea of "atonement" in a later post.

#1 - God helps those who help themselves.

No. Stop saying this. The quote is William Shakespeare's to claim. But, even more than that, the biblical witness points to theopposite of this particular phrase. Again and again, God calls people who can't seem to pull themselves up by their bootstraps - Mary, David, and Moses, to name a few.

The Rev. Bob Hooper is the rector of St. James’s Episcopal Church. He blogs for St. James’s most Tuesday, reflecting on the community, parish life and (being Rector) anything else he likes.