I am enamored of Pope Francis. Every time he clarifies what he believes about the Catholic Church, its priorities, and its purpose, I am grateful that God gave this wise, smiling cleric a worldwide audience. Francis’s thoughtful, humble way of speaking about God and the church is good for all Christians, not only those who are Roman Catholic.

It is not necessary to talk about these issues [abortion, gay marriage, and contraception] all the time. The dogmatic and moral teachings of the church are not all equivalent. The church’s pastoral ministry cannot be obsessed with the transmission of a disjointed multitude of doctrines to be imposed insistently. We have to find a new balance, otherwise even the moral edifice of the church is likely to fall like a house of cards, losing the freshness and fragrance of the Gospel. 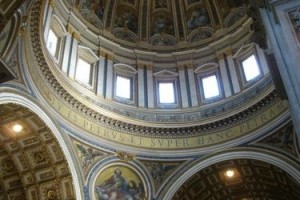 A significant portion of my writing career revolves around Christian reproductive ethics. So I have a pretty passionate interest in abortion and contraception, along with assisted reproduction and genetic screening. But I also get frustrated when Christians make issues of reproduction and sexuality some sort of litmus test for whether you are a “real” Christian, implying that one’s position on the morality of abortion or contraception or homosexuality must be a central concern in one’s life of faith. Such a focus doesn’t model Jesus, who said far more concerning poverty, money, and social exclusion than sexuality and reproduction. A robust faith is more about receiving and sharing God’s love than toeing a party line on particular issues.

So Pope Francis’s insistence that the “freshness and fragrance of the Gospel” (what a phrase!) ought not be sacrificed to our limited notions of what issues are most important is a needed corrective. It is a corrective not only to the Catholic Church, but to some evangelical churches that also focus on sexuality and reproduction to the exclusion of other issues and the detriment of Jesus’s overarching message about God’s love and grace.

Francis’s message is likewise a corrective to us Northeastern Episcopalians. Although we hold a diversity of political views, we, unlike many traditional Catholics and evangelicals, tend not to make activism around certain controversial issues central to either our individual faith journeys or our corporate identity and congregational work. At St. James’s, we are far more likely to hear a sermon about economic inequalities than about sexual or reproductive ethics. Our bulletins and newsletters are full of invitations to feed the hungry and help house the homeless, not so much to join busloads of people going to D.C. to march for or against abortion policies.

But we can find it too easy to write off our brothers and sisters, whether Roman Catholic or evangelical, for whom reproductive and sexual ethics are very important. We (and I purposely include myself here) can indulge in eye-rolling, dismissal, and comments like, “Oh, those Catholic priests are against contraception just because they are men. They just want more Catholic babies to be born.” (For the record, the official Catholic position against contraception arises from a theology of marriage that, while I don’t agree with it for many practical reasons, is nevertheless quite lovely.) Or “Those evangelicals care a lot about fetuses but not so much children.”

In any denomination or church, there are people with extreme opinions, who hold positions on sociopolitical issues that utterly lack reason, nuance, or compassion. But those people are a minority. Most Catholics and evangelicals (and Episcopalians!) who hold strong opinions on sexuality and reproduction do so thoughtfully. We would go a long way toward realizing Jesus’s vision of unity among his followers if we emphasized the similarities between more liberal and conservative denominations and individuals, rather than the differences.

It took meeting my friend Karen to teach me the value of unity in spite of big differences of opinion. Karen is a professor of English literature at Liberty University—you know, Jerry Falwell’s conservative evangelical university in the mountains of Virginia. Karen is brilliant. Karen is also vehemently pro-life, as in “I will go to jail for protesting against legal abortion if that’s what it takes” pro-life. I am firmly if moderately pro-choice. Karen and I held an online conversation about abortion on a friends’ blog a couple of years ago, which I consider one of the most important things I have ever written. The response we got from readers on either side of the abortion issue was overwhelmingly positive. Karen is one of my most treasured colleagues, as well as a friend. She and the other articulate, thoughtful, faithful evangelical and Roman Catholic writers with whom I work remind me daily that we Christians can have very different opinions on sociopolitical issues, and still come together in our allegiance to Jesus Christ and the gospel of grace.

This latest interview and his earlier statements on homosexuality do not mean that Pope Francis is a liberal, or even a moderate. There’s quite a bit on which Pope Francis and I (and many of us at St. James’s) would disagree. But Pope Francis has clearly articulated that the core Christian message of love, grace, and humility—the “freshness and fragrance of the gospel”—is far more important than our position on particular social and ethical issues. We can follow his lead by embracing that vision of God’s kingdom and God’s people, even when we have serious differences of opinion with other believers.