Today is Benjamin’s (my youngest child’s) eighth birthday. I think that makes it official: I am no longer a mom of “little” kids—a fact that makes me simultaneously cheer with relief (everyone can bathe themselves!) and ache with longing (no more bow-legged first steps or funny toddler sayings). Last week, I was watching an assembly at my kids’ elementary school when a couple of tiny, adorable kindergarteners took the stage. My friend Leeann, whose kids are about the same ages as mine, turned to me and said wistfully, “We’ll never have such little kids again.” Then she paused, cocked her head, grinned, and said, “On the other hand, we’ll never have such little kids again!” This is, indeed, cause for both wistful longing and relieved celebration. 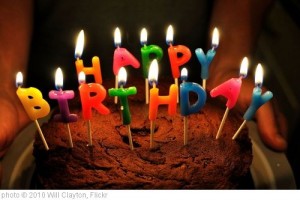 One ritual of young childhood that I will not miss is hosting birthday parties. Ben’s party yesterday was probably his last traditional party; once my kids get to age 9, we ask them to pick a special activity to do with a couple of friends (a movie or sleepover) instead of a party. I’m not one of those moms who loves dreaming up creative themes, complete with inspired crafts and clever snacks, for my kids’ parties. I’ve always preferred small parties, where we invite a few of my kids’ closest friends to do something fun but relatively low-key, such as swimming or pottery painting. Add homemade cupcakes and juice boxes, and we have a nice little party. Other parents have a bigger vision, inviting their child’s entire class to shindigs at the Jump Zone or Nomads (i.e., large warehouse-like spaces where large groups of children run wild).

I admit that, when my kids were younger, I looked down my nose at parents who planned these huge parties. I assumed they just didn’t want to bother taking the time to figure out which kids their child actually knew and liked. I didn’t get why any parent would want to host 22 kids for a birthday party. Why would you knowingly engineer such chaos? And who wants their child getting 22 birthday gifts, most of them from children you barely know? Surely, I thought, my way of planning parties was better at fostering solid friendships rather than just filling large spaces with the maximum number of children.

But a few years ago, I got into a conversation with some other parents about birthday parties. It turns out that some of the “big party” parents look down their noses at us “small party” folk, because they feel that our more exclusive guest lists are potentially hurtful to other children. They would rather err on the side of inclusiveness, even if it means a more chaotic party. A friend explained that her oldest son, who was socially awkward and struggled to make friends, went a couple of years without getting invited to any birthday parties. She decided that from then on, they would be the family that invites the whole class to every party, so no other child would feel excluded as her son felt excluded.

I still prefer small parties; yesterday, Benjamin had seven friends practice and perform a one-act play for the parents. We served Boston cream cupcakes and apple juice, and everyone had a great time. But I no longer judge parents who throw big, whole-class parties. I realized that all of us are simply trying to help our kids celebrate their special day while also teaching them something about how to care for other people.

If we can become judgmental about children's birthday parties, imagine how much more judgmental we can become about how to live out our Christian faith. We don’t have to imagine, actually, because that sort of judgment is easy to find in Christian circles. Sometimes, we talk and act as if certain kinds of ministry—the ordained kind, or international missions work—is more important than less overtly “churchy” work. Sometimes, it seems that the more visible, extroverted work of active ministry out in the world gets more recognition than the quieter, introverted work involved in planning or budgeting or cleaning up so that such active ministry can happen. We can be dismissive or suspicious of faith practices unfamiliar to us—raising hands during prayer, peppering casual conversation with plenty of "Jesus" mentions, good old-fashioned evangelism, the veneration of saints. It is so easy to look down on people whose faith looks different than ours, especially when we have so much invested in how we do things.

In the church I belonged to in DC, each member joined a small “mission group.” Mission groups were centered on a particular type of work or ministry. At one point, I decided to leave a group that was working on some social justice issues to start a group focused on liturgy and worship. One member of my former group was clearly having a hard time with my leaving. He finally admitted outright that he just didn’t think that liturgy and worship were as important as the social justice work my former group was doing. Well, that hurt. A lot. I’ve tried to remember that hurt any time I notice myself talking as if a certain kind of ministry, or a certain position on a political or social issue, or a particular way of doing liturgy, or a particular tradition is obviously the most Christian way of doing things.

The diversity of the Christian church—the body that includes New England Episcopalians, southern evangelicals, Holy Spirit-fired Pentecostals, Anglicans preaching the Gospel to people raised on animist beliefs, Roman Catholics who adore Pope Francis and Roman Catholics who aren’t so sure about him—is both a great gift and a great challenge. Christianity is a huge tent incorporating a vast variety of tradition, language, liturgy, and ministry, It is tempting to look down our noses at those who don’t do Christianity our way, assuming the worst about other Christians’ motives and priorities, just as I used to look down my nose at parents who celebrated birthdays in a way I didn’t understand. Since hearing my friend’s story about her son, I try to assume that parents are simply doing the best they can to love their children. When we hear the stories of other Christians, here in our own congregation or in far-flung churches of very different traditions, we can likewise assume that most Christians are simply doing the best they can to follow Christ.