The sight of a Christmas tree strapped onto a car roof awakens all kinds of anticipation for me; at this time of year, even the mind-numbing routine of driving my kids around is made delightful by the sight of lighted trees and electric candles in people’s windows, and strings of lights adorning outdoor trees and shrubs. But in a few short weeks, the trees being carried home this week to be trimmed with lights and ornaments, to be quietly admired in a darkened room just before bedtime, and to become the centerpiece of a pile of gifts on Christmas morning, will be tossed out on the curb in a whirlwind post-holiday clean up. Holiday traditions are fleeting, which makes them special and satisfying—and even a little bit melancholy, when they remind us of how quickly time passes, how surely things change, and how it is in the nature of our world for things, even the best things, to end.

My son Ben thinks about things more deeply than I expect from a not-quite-9-year-old, and his musings can catch me off guard. A few nights ago, for example, he said he needed to talk about something that was bothering him. Turns out, the “something” was pretty big picture. Literally cosmic. “I’m angry at God,” said Ben, his voice catching a little bit, “because he made the sun so that some day it’s going to expand and burn up the earth and that isn’t right. Why didn’t God make it so the sun will burn up those dumb gas planets that aren’t there for any good reason? I know we won’t be here when the earth gets burned up by the sun but I wish it wasn’t that way.”

Ben and I talked for a while, and to be honest, I’m still not completely clear on what, exactly, was bothering him, except that it had something to do with good things ending and life dying and why it is in the nature of the universe for even the best things to end. I told him that I hope any time that he is feeling angry with God, he talks to someone about it, and tells God about it too. I think being angry with God, and engaging that anger instead of walking away from it (and from God), is part of living a faithful life. I talked about how the fact that everything we love—including this very earth, including human life as we know it—will end is really, really hard to accept, but that it can make us even more grateful for what we have and even more aware of what is beautiful and good. 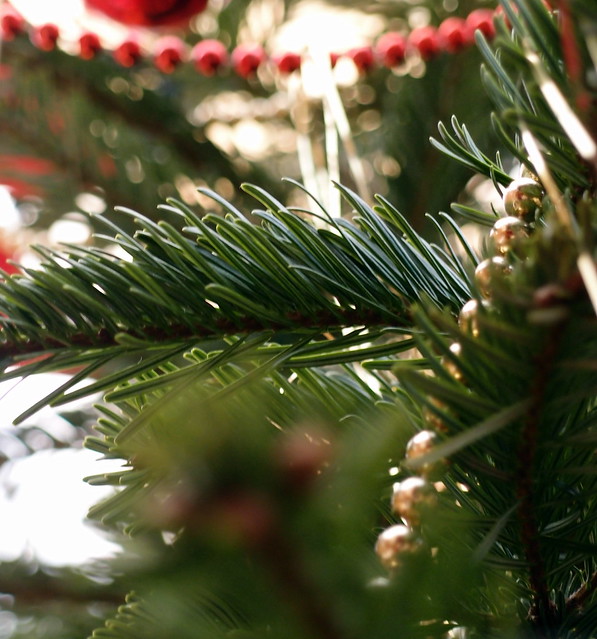 I thought of those Christmas trees on car roofs that I passed so often this weekend, and our own perfect tree (purchased at St. James’s on Saturday, in the rain). I thought of the way that the house on the corner of Ridgewood Road and Boulevard, with every one of its many windows glowing with an electric candle, lifts my spirits every time I pass it. (And given how frequently I drive my children to and from St. James’s every week, I pass it often.) I thought of the way that Christmas’s impending arrival puts a zing of anticipation into everything, from the afternoon mail with cards arriving from far-flung loved ones, to the stockings hanging limply on our fireplace mantel that will be bulging with goodies on Christmas morning. I thought of how the smells of a fir tree and my grandmother’s anise cookies baking in the oven can conjure feelings of excitement, joy, and contentment that can be awfully hard to come by in a world dominated by bad news, in a life dominated by endless responsibilities and demands.

And then I thought of those beautiful fir trees, the lights gleaming out from their branches to bravely defy the dark that falls so early, lying limply on the side of the road in a few weeks, to be covered with dirty snow and carted away for recycling. I thought of how the mail will revert to a disappointing pile of bills and catalogs, the stockings put into storage for another year, the oven used mostly to heat up a casserole or a loaf of store-bought bread in the nightly rush to get something on the dinner table.

Thinking of these things, of how we already know, in our anticipation and activity, that this season will end and dump us back into normal life, with months of dark and cold to endure without the help of candlelit windows and fir-scented living rooms, made me think I understood what Ben was trying to say, at least a little bit. Everything, even all that is good and beautiful, is passing away. Our lectionary scripture this week from 2 Peter read, in part:

Like Ben, I hate the idea of this amazing world, with all its beauty and goodness, being dissolved in fire. I hate the sight of forlorn Christmas trees on the side of the road in early January, even as I am relieved to clear my house of all the Christmas clutter. I hate that we live in a world where endings, including the hardest sorts of endings—the violent deaths that are dominating our news right now, the more mundane deaths of hope and joy that all of us feel at one time or another—seem to be written into the very nature of the world. I hate that the baby whose birth made the very stars shine more brightly, who grew up to preach God’s peace, healing, and justice, was brutally executed by those too scared of how God’s justice threatens the shaky foundations on which we build self-absorbed, limited lives.

But if endings are written into the world, so is resurrection. Winter’s dark and cold will, slowly (far too slowly, it will seem, come March) make way for spring’s sun and warmth. The lights and ornaments and stockings put into storage will be brought out again, to adorn a house where children and parents are a year older, perhaps a year wiser, or sadder, or maybe about the same, but just as in need of those zings of anticipation, joy, and light that Christmas brings. Good Friday will be followed by Easter. And “in accordance with God’s promise, we wait for new heavens and a new earth, where righteousness is at home.”

As I told Ben, I don’t know how or when everything will end—our own lives or the earth or the universe itself. But I’m grateful for everything that is so beautiful and good, even when I know it won’t last forever. I'm grateful for Christmas trees adorned with ornaments and sparkle and lights, even knowing they will end up on the side of the road, waiting to become next spring's garden mulch.

The Language of the Unheard

An entire pack of Lifesavers