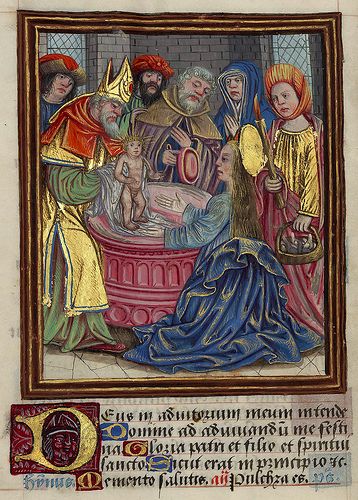 Let’s see if we can summarize the story of Jesus’ presentation at the temple in Jerusalem.

(Note: It’s not like a PowerPoint presentation…his parents are bringing him to the temple to fulfill the custom of presenting one’s firstborn child to the Lord.)

So that’s what Mary and Joe are up to, and they bring the sacrifice of two turtledoves—no partridge in a pear tree. And an old dude named Simeon is super holy and has that aura of the Holy Spirit all around him and he just goes on and on about how wonderful little Jesus is and will be—how his life will change things…but only if Mary and Joe show him Baby Einstein videos (okay, maybe not).

And then as an afterthought, Luke mentions that there’s also a woman—an old, widowed woman named Anna—who is also pretty cool and praises God for little Jesus.

And then as an after-afterthought, Jesus grows up in only seventeen words, or three if you narrow your focus to “the child grew.” Luke doesn’t waste any time. Given how much of an impact one’s family of origin has on one’s adult relationships and behavior, why is Jesus’ childhood so limited?

Luke took the time to describe Jesus’ parents—Mary is virtuous, faithful, courageous; Joe is patient, understanding, and generous. Luke did not describe them with adjectives but with the story of Jesus’ most unusual conception and birth. And then after that lengthy narrative, Luke gives us a few descriptive words about Jesus growing up; no stories, no parables, no nothing. Are we to imagine that he was perfect? Are we to imagine that he was normal?

If you haven’t read Lamb: The Gospel According to Biff, Christ’s Childhood Pal, I highly recommend it. This piece imagines, in a humorous way, what Jesus’ childhood may have been like, and it does so in a way that makes fun of the notion that this fully-human human being was “perfect.”

As Robert Farrar Capon put it in Hunting the Divine Fox, “We somehow feel obliged to say that [Jesus] was a little freak who never hid when his mother called him, who always put his toys away in his toy box, and who, when he got to the age at which boys have wet dreams, piously refused to have any. But that’s theological folly. It’s winning a minor battle at the price of losing the whole war. The big things to be defended about Christ are his Godhead and his Manhood. It would be far better to bend the concept of his sinlessness a bit than to lost sight of his humanity in the process of trying to say how good it is.”

We have a real problem accepting Jesus’ humanity; we imagine a human, but better. We put Jesus the man on a pedestal and effectively eliminate the possibility of emulating his life. But Jesus was a man just as much as Christ is God. “There is no manhood in his deity. And there is not one shred of God in his humanity, any more than there is in yours or mine—loose talk to the contrary notwithstanding. The union of the two natures is precisely a union, not an amalgamation,” as Capon also wrote. And “we don’t want to be saved in our humanity;” Capon wrote, “we want to be fished out of it.”

What if what Anna and Simeon saw in Jesus was his humanity as well as Christ’s divinity? The Holy Spirit rested upon Simeon, and at the sight of Jesus he and Anna both praised God and looked forward to redemption. What if they did this not because they saw young Kal-El in Mary’s arms, but because they were especially aware of the ebbs and flows of Ms. Holy Spirit in their midst in the Christ Child?

Maybe their experience is that “Holy-cow, what-was-that, where-did-that-come-from, how-did-that-happen experience of the living God” that the Rev’d Francis Wade describes in a sermon on the mission field. It is this kind of experience that Moses saw in the flames of the burning bush, the people witnessed in the wilderness and later in the temple. The experience of the Living God happens in the scope of human experience. It offers joy and hope as it inspires praise and reveals to us the wonders of this world that God creates.

Why this story? Maybe because it grounds us just a little bit more in Jesus’ reality and humanity, as well as our hope for salvation within our own humanity.