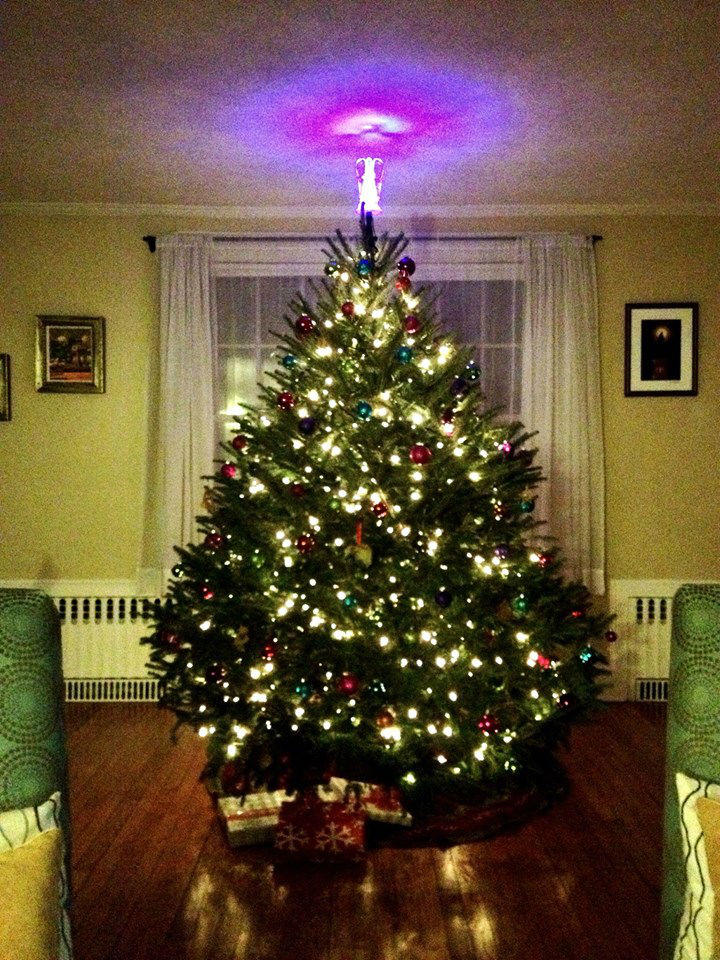 Sermon preached by The Rev'd Curtis Farr on Christmas Eve at the 11 p.m. Choral Eucharist.

My friend, Becky, posted a picture on her blog of her Christmas tree—a lovely thing decorated with white lights, white and red ornaments, a few candy canes for good measure, and set against a brick wall. A wood cutout of the word “hope” sits in the windowsill to the left.

Becky posted another picture. “Same room, just a different perspective,” she wrote. The room is an utter disaster—stacks of paper, unhung picture frames, three different kinds of chairs, and a jagged pathway to the closet on the other side of the room (which is bursting open with coats, hats, and scarves).

Christmastime is a sort of room of which there are dozens of perspectives—Christmas can be a cozy memory of friends, family, and food, or it can be a time when the absence of any combination of those things is particularly poignant.

Now there’s a lyric you won’t hear in any Christmas Carols—except maybe a lost verse from The First Noel.

Joe is a stand-up guy though; he doesn’t want to turn her in to the authorities. According to Matthew, an angel visits Joe in a dream and tells him to stick with Mary. According to Luke, he takes his unwed pregnant fiancée to Bethlehem to be counted in the census. There is no room at the inn, they head to the manger out back, and Mary gives birth to the Son of God. If that weren’t enough, a bunch of strange, dirty shepherds show up at the scene running out of breath and trying to describe what they just saw: the multitude of the heavenly host and the angel’s announcement that Jesus is the Messiah.

This is not the way any mother-to-be expects the birthing process to go—Mary’s birth plan did not include shepherds and a manger. The big day is utter madness—total chaos. And yet from our perspective, Jesus’ birth is a lovely little tale. We have adorable children play the roles, we set up comforting and Anglicized Nativity sets, and we watch Linus narrate the whole story in his gentle voice on A Charlie Brown Christmas, but “The First Christmas” was anything but meek and mild; and in that way, Christmas really hasn’t changed that much.

The whole season gets a bit chaotic—shopping, wrapping, cooking, and cleaning. This and the way that the holiday is secularized with trees, Santa, and copious consumerism, can make Christmas seem like a set of undesirable chores, errands, and obligations. More often than not, religious folk take the opportunity of the season to get all “shamey-judgey” on Christmas’s secularization.

There’s the push for more observance of Advent—the four Sundays leading up to Christmas. There’s the not-so-subtle encouragement by some churches to, “beat the Christmas rush and come to church this Sunday.” And then there is the finger wagging for buying more stuff than you need while people down the street are jobless, foodless, and homeless.

It is foolish to suppose that these Christmas appeals are unwarranted. Generally speaking, we have puffed up Christmas in some strange ways to an inappropriate extent, and we do sometimes go overboard in our indulgence of consumerism, and in the process we vanquish the jobless, foodless, and homeless to a splinter-sized feeling of guilt deep below our holiday cheer.

The chaos of Christmas can get the best of us, and there is no reason to pretend otherwise. And yet it is quite clear from the story of “The First Christmas” that God isn’t interested in taking care of the chaos on our behalf. In some way, God is interested and invested in us as we live our lives in the midst of chaos. Maybe that is because it is under stress, disappointment, and frustration that we are most aware of our need for each other and for God; and yet—somewhat ironically—for those who feel especially lonely this time of year, it is in the absence of chaos that the need for meaningful relationships is most realized.

To someone feeling forgotten or lonely, even chaos can look a lot like hope, peace, love, and joy—a different perspective on the same Christmas.

As Mary sits in the presence of her newborn son, her fiancé Joseph, and a herd of shepherds in her 1st Century birthing suite, she treasures the shepherds’ words of joy and celebration in her heart; she mulls over the entire event. Something spectacular and tumultuous and wonderful and frightening and divine has happened, and yet what lies ahead of her is not a life of riches and royalty—to a point, Mary’s will be a life of cooking, and cleaning, and caring for her child as she watches him grow into a man—a man who will stand up to the “powerful” and proclaim a new perspective: that love is for all of God’s children—the weak, the strong, the joyful, the sorrowful—everyone…everybody is searching for love and we have the power and the profound responsibility to deliver as well as the right to abundantly receive.

God did not become incarnate in Jesus in order to call us out of the chaos of this world—on the contrary, God invites us more deeply into the chaos in order that we might learn to truly love in its midst. Chaos woos us to love other gods like ambition, sex, and money, but God invites us to look and live beyond those fleeting things and see a new perspective on the world. Now serving God does not exclude buying presents for friends and family, cooking fantastic feasts, or decorating to the point that it looks like Santa’s reindeer just paraded through your living room.

I am totally guilty, by the way.

Serving God means that in shopping, wrapping, cooking, cleaning, child-rearing, working, waiting, reading, and eating, we also learn to be midwives to the birth of God’s kingdom among us by seeking justice, feeding the hungry, and housing the homeless. Christmas is a celebration that enables us to calibrate our lives to treasure and ponder what God has done in the world to the point that we better perceive and engage in what God is doing in the world—in the midst of chaos, in the midst of banality, in the midst of deep suffering and anguish and, yes, in the midst of joy and celebration.

Celebrate this season the way the shepherds, Joseph, and Mary celebrated the birth of Jesus. Rejoice that God is present in everything from the mundane, to the joyful, to the utterly chaotic. And finally discover with the angels a fresh perspective on the ways of the world, singing “Gloria in excelsis deo!” (Glory to God in the Highest), for a joyful thing has happened in Jesus and is happening among us.

Have a merry and blessed Christmas.