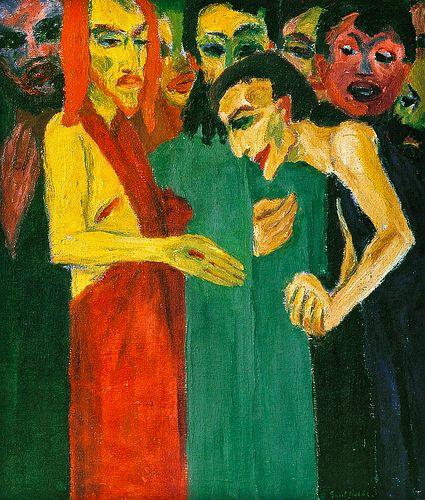 If read out of it’s proper context, this Sunday’s reading from Acts would make it seem like Jesus’ disciples had really moved on after just about a week since Jesus’ death. We’re actually well beyond Good Friday when a now-articulate and faithful Peter steps up and delivers his famous sermon to the various Israelites in Jerusalem.

Actually this reading comes from the day when the Holy Spirit comes with a roar and lays on the disciples in the upper room like a tongue of fire. We call this day Pentecost. Jews call it Shavout or the Feast of Weeks. It occurs five weeks after Easter for Christians (hence Pente-cost) and on the sixth day of the Hebrew month of Sivan for Jews. Jews remember Shavout as the day they received the law from God. Christians sometimes recall this as the birthdate of the church.

We still have to wait four-and-a-half weeks for Pentecost, but let’s see what our lectionary might be telling us with this portion of Peter’s speech that day.

Peter declares, “Jesus, a man who did groovy stuff among you dirty rotten people in Jerusalem, was handed over to you not by accident, but by part of God’s definite plan and foreknowledge. You crucified and killed him through others’ hands, but you didn’t win; God raised him up and freed him from death. When your hero David spoke of the one with whom the Lord is always present, the one whose flesh lives in hope, the one who will not be abandoned to Hades, the one who would not experience corruption…yeah…that was Jesus that David was talking about.”

“You messed up, but your mistakes were not as fatal as you thought. He is alive.”

Having seen the risen Christ in the upper room and having encountered the powerful Holy Spirit in that same room, Peter speaks with newfound confidence and faith. Peter calls everyone present to be witnesses to the truth that although some would like to think that they can take God’s role of “god-ness” into their own hands, God alone is God, and Jesus is the one through whom freedom from death has been proclaimed for the entire world…

…and “all of us are witnesses.”

But that’s not true, really. We’re not all witnesses. The crowd gathered really only has a parlor trick with different languages (caused by the tongue of fire) to go on—and I’m not sure, but I think that the Rosetta Stone may have been in a beta stage at this time. This is not to mention that us reading it are even further removed from any kind of physical evidence that any of this ever happened at all!

We are not all witnesses—not in the traditional sense, that is.

Skip to the Gospel for Sunday—Thomas hears his friends tell him that Jesus returned in flesh and blood, but he demands to touch Jesus for himself. A week later, Jesus returns to offer Thomas that chance to witness Jesus’ return for himself.

The text doesn’t say whether or not Thomas actually touches Jesus—Thomas makes his request, Jesus invites him to touch, and Thomas says, “My Lord and my God!” Does he believe by simply seeing? Jesus asks Thomas if he believes because he has seen, not because he has touched. Did even Thomas make a leap of faith that day in the upper room?

Anyone who believes anything beyond what we can see, taste, touch, smell, or hear takes this sort of leap of faith. And even for these things, we can become witnesses. I would witness to Antonio’s love for me, but I can hardly manage to prove any such thing. I can provide a list of pointers that for me suggest this love, but ultimately I do not know the “truth” in the strictest/factual sense of that word. The pointers might be the way he treats me, the way I feel in response to his company, the gestures of kindness he performs like cooking dinner and walking the dog. I (mostly) unconsciously add these pointers together and believe that he loves me.

Thomas, Peter, the rest of the disciples, and any others who have come to believe something about God have had to take whatever pointers they have experienced and to use them to form their faith.

We’re working with broad concepts here like faith and belief, and if you feel like the semantics game is tripping you up (it often does for me), you might check out Marcus Borg’s book Speaking Christian. He redefines some of these terms to hopefully inject them with the kind of meaning that washes away some of the baggage they’ve collected over the years.

Our question this week, as we listen to Peter and have healthy doubts like Thomas, might be: What pointers in your life make you suspect that God might love you, and how can you be a witness to those pointers in a way that encourages and lifts up others? Don’t worry about proving anything—that’s not the point.

Even Jesus says that those who are lucky enough to have come to believe without seeing can count themselves blessed; most of us have to go on without proof.

The Rev’d Curtis Farr is the assistant rector of St. James’s Episcopal Church. He blogs for St. James’s every Wednesday, offering reflections on the readings of scripture from the upcoming Sunday. His personal website is www.FatherFarr.com.