Home > Blog > On Sin, or Why Our Best Traits Are Also Our Worst

I was reading the New York Times Sunday book review section when I read these sentences (attributed to Sheila Heti, editor of a book being reviewed):

I thought, “She’s talking about me.” (Well, not me exactly, but people like me.)

I am a champion discerner. I would even say that discernment is one of my gifts, which contributes to my being a good writer. I notice details. I notice all the details. My noticing has a definite critical bent—critical in the sense of applying considered judgment. I notice incorrect word usage, assumptions made, stereotypes perpetuated, logical failures, the absence of necessary evidence or information, and other problems that undermine someone’s intended message. 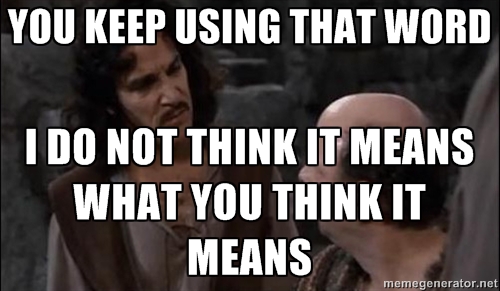 Being discerning in this way makes me a better writer not only because I strive to avoid such problems in my own writing, but also because I will often provide a different perspective on an issue and encourage readers to question common assumptions.

But being a discerner also, as the above quote pinpoints, makes it hard for me to see the “good everywhere.” Discernment makes me a bit of a crank, a killjoy, an overthinker. It's exhausting to constantly parse the world this way. I don't merely annoy other people. I annoy myself.

Take once again (last time I promise!) the Ice Bucket Challenge, whereby the whole world (it seemed) was frolicking in freshets of icy water, their faith in people’s generosity boosted by the sheer number of people who participated in this exercise to support those with a devastating disease. Meanwhile, I was sputtering on the sidelines, wondering what happened to logic and clarity and if I was crazy not to understand the challenge's appeal. I don’t think I was wrong to note the problems with the Ice Bucket Challenge, and I wasn’t the only one who did. But I was too preoccupied to see the very real and significant good that other people readily embraced.

I could give dozens of examples of a similar dynamic, when I am ever-ready to question what others have accepted, pointing out problematic details regardless of the overall goodness of the message. I could also give dozens of examples of when my attention to details that others overlook have led me to write something valuable. (My attention to detail also means that I always know which socks belong to which child and what time they need to be at their various activities, unlike some other people in my household. But I digress.)

Discernment is one of my gifts. Discernment is also one of my stumbling blocks. This dichotomy is true of every gift we have. All gifts have their shadow sides. A great storyteller can entertain people and make them laugh, and also monopolize conversations and go on too long. An introvert knows the value of silence and only speaks when she has something important to say, and also misses opportunities by not speaking up. An optimist inspires other people by focusing on promising possibilities, but can also ignore problems until they become overwhelming. I bet most of us, if we were to list our strongest traits, could list both good things and bad things that come from them.

Thinking about how even the greatest gifts have their "shadow" side helps me to contemplate the notion of "original sin" in a fresh way. The fact that all human beings sin—that "All have sinned and fall short of the glory of God" (Romans 3:23)—seems obvious given the state of the world. But some religious traditions emphasize people's innate sinfulness, and God's response to it, in troubling ways.

In my evangelical college fellowship, for example, the prevailing theology was that we humans are so sinful and depraved that we deserve nothing from God. I remember a speaker who told us that his wife would stop him any time he used the words, "I deserve..." in a sentence, even if he was just joking around saying, "After that hard day of work, I deserve a good burger!" We deserve nothing but pain and punishment, his wife would remind him, because of our inherent sinful nature. Jesus took our punishment on himself so we wouldn't have to take it ourselves. Hearing this story, I thought of all the terrible ways human beings have treated each other through history and now—pogroms, slavery, child abuse. A theology in which humans are so awful that we deserve nothing from God but punishment is, to me, essentially saying that it is just and right for God to treat us terribly, akin to the very worst ways that we treat each other.

I don't see Jesus's dying on the cross primarily as a way to redirect the terrible fate we deserve onto his own shoulders. (At the Saturday morning men's group this week, I'm going to be talking about some alternate views of why Jesus died on the cross. You should come!) But furthermore, I don't see original sin, or the concept of sin at all, as being about what we do or don't deserve from God.

A writing colleague, Ian Morgan Cron, describes the Bible as "the story that explain[s] the way the world is." That's how I see the biblical account of sin, from "the fall" of Adam and Eve in the garden, to all that the gospels and Paul's letters say about forgiveness and God's grace. That we are sinful, "originally" sinful in that our tendency to do selfish, hurtful things is innate, is a description of how things are. Our sinfulness is obvious when we look at the terrible ways that people treat other people. It's also apparent when we consider that even our gifts have a "shadow side" that can hurt us and others.

As a Christian, of course, I believe not only in the reality of sin but also in the possibility of redemption. I believe that God is always working to transform our hearts, our minds, and our world. With my gift/curse of being a discerning person, I hope that such transformation will come about as I learn to more thoughtfully and lovingly determine when to speak up about problems and when to sit back, listen, and celebrate the good. I want to maintain a discerning mind while cultivating a more democratic heart.

What particular gifts do you have, and what do their "shadow sides" look like? Where is God's transformation needed?