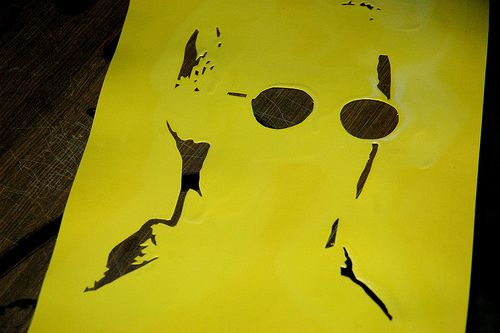 It’s amazing how we can walk right by and even look directly at someone we know and not recognize them.

A video caught my eye this week—one in which friends and family members of unsuspected people were dressed up and posed as homeless people on a city street in an attempt to see if their loved ones would recognize them. Of the five test subjects recorded, not one of them recognized their loved ones as they sat or stood right in front of them. As they saw the footage of the experiment, the subjects sat in silence—perhaps a mixture of surprise, confusion, and a little bit of guilt.

The experiment is part of New York City Rescue Mission’s campaign Make them Visible with the hope that it will change the way many see homeless people. Apparently how many see those who are homeless is not at all.

When two of his followers were walking away from Jerusalem toward a place called Emmaus, Jesus (three days after his death) joined them on the walk. He talked with them, asking about the prophet who had been killed whom he seemed to know nothing about. They expressed their grief—they had hoped Jesus would redeem Israel; instead, he died a gruesome death.

Sure, some of the women in their group saw a vision of angels who said Jesus was alive, and sure, some of the men checked on the tomb and found it as the women had said, but they didn’t see Jesus…so…all is lost.

And then as they sat down for supper, Jesus broke bread; in that act of taking, blessing, and breaking bread, they recognized Jesus.

And then he vanished.

What the heaven, Jesus?

What does it mean that Jesus would vanish from his friends and followers the moment they recognize him?

Historically what it has meant is that his followers continued to break bread in a similar fashion, perhaps hoping to summon the Risen Christ back into their midst. Don’t worry, I’m certainly not out to attack the Eucharist; I simply mean to point out that in this post-resurrection account, Cleopas and company aren’t trying to summon Jesus when he appears to them—nor are they trying to do so when they actually recognize him.

Jesus is with them long enough for them to realize only in hindsight that the entire day they experienced their “hearts burning within [them].” It’s a bit like how those in the NYC Recue Mission’s experiment responded to seeing themselves walk past their loved ones dressed as homeless people.

When our hearts and minds are focused on who and what we expect to see, we often fail to recognize the unexpected.

About a year ago, my friend Oscar planned to fly into Virginia from Minnesota to propose to my friend Liz. A bunch of us tried ardently to keep Liz at our table at the restaurant where Liz and Oscar had first kindled their relationship. Oscar called Liz from just outside the front door to initiate the surprise, but unexpectedly, Liz jumped out of her seat and walked out the restaurant—out the front door. Oscar held the door for her and sidled into the restaurant as she exited.

Liz did not recognize Oscar.

We have the capacity for deeds done with great love (to paraphrase Mother Teresa), but quite often those deeds and those relationships are unrecognizable. We have to go looking for them. We have to take charge of making the invisible visible. Our lives don’t depend on ceasing every possible opportunity to engage other people, but it is in companionship and sharing moments and breaking bread that we know and recognize those in front of us.

Maybe one way we can make the invisible visible is by setting a daily goal for ourselves to do just that…just once a day. One small intention for the day could change the way we engage each other and the world. So whether you are walking to Emmaus or down a city street or to your table in a restaurant, take a moment to consider the invisible opportunities that surround you.

The Rev’d Curtis Farr is the assistant rector of St. James’s Episcopal Church in West Hartford, Connecticut. He writes for St. James’s every Wednesday, offering reflections on the lectionary readings for the upcoming Sunday. His website is www.FatherFarr.com, and his Tumblr blog is www.BowingToMystery.com.