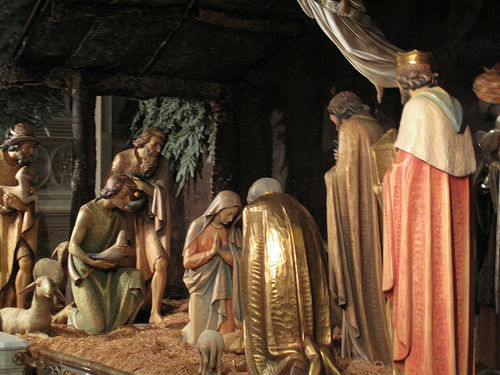 So Joseph finds out that the young girl he is about to marry has become pregnant with a child from the Holy Spirit. He thinks about exposing her to save his reputation as a righteous man, but an angel appears to him in a dream and tells him, “It’s cool, she’s fulfilling a prophecy from Isaiah about a virgin giving birth to a son. She will name him Immanuel.”

Joseph is cool with that, so he marries Mary, they don’t have sex until she gives birth at home in Bethlehem, and they name her son “Jesus.”

(If you were looking for magi and an escape to Egypt, those come later. If you were hoping for shepherds and a census, that happens in Luke’s version of the story.)

This passage raises a few questions:

We’ll start with the third question and work our way backwards from there.

What is up with this prophecy? No one used Isaiah 7:14, the piece about virgin birth and “Immanuel,” to talk about the expected messiah before; Matthew was the first. The whole virgin birth thing is a story that many religions have adopted for one reason or another. Horus, Chrishna, Buddha, and several others share similar birth narratives to Jesus, so does that mean that Jesus’ story is false? Or does it mean that we should also be following/worshipping Horus, Chrishna, Buddha, and so many others?

Probably neither. Remember, the purpose of biblical stories such as these are not so much to get all of the facts straight as they are to send a message about the bigger truths behind the actual events. That isn’t to say that Jesus’ birth narrative is definitely not true to history, just that perhaps the thrust of the story is about how Jesus is truly the one God’s revelation to humankind.

But if God had chosen to reveal Godself to us in Jesus, with a loose connection to a prophecy and similarities between his birth narrative and those of many others, why did the Angel tell Mary and Joseph to name him “Jesus,” instead of “Immanuel,” as Isaiah wrote down? The name “ישוע” (or “Yeshua”) translates as both Jesus and Joshua; they are the same name. Thumb through your Bible and find who it was that brought the people of Israel out of the wilderness into the Promised Land. No, it wasn’t Moses, he led them out of Egypt, but it was Joshua who led them into the Promised Land. It may be significant that Jesus shares his name with Joshua because he also brings God’s people into a land of promise—in a liminal way (right now, but not quite yet).

So Jesus is connected to Joshua, but he is also connected to a plethora of biblical figures through his stepdad Joseph, which means he really isn’t connected to them by blood. Who they are include the patriarchs of Judaism: Abraham, Isaac, and Jacob; and great kings of Judah: David, Solomon, and others. Having these heavyweights of Judaism in his tree, Jesus seems destined to royalty, but the fact that he is not related by blood and is actually born of a virgin (whose genealogy Luke traces back to Adam) means that his throne is not an earthly one.

Remembering that the purpose of stories like these may include the hope to send a message, what message might these genealogical circumstances be telling us? Perhaps the important thing to believe about Jesus is that the way he lived and died reflects the nature of the God who created us. By transgressing the bounds of kingship, and by never flinching to the temptations of the domination system, powers, and principalities of this world, Jesus showed us that God nurtures each and every one of us as Joseph did Jesus, even when we feel as though we are illegitimate. We have no choice in the matter of whether or not God will welcome us into his embrace—it’s a choice we shouldn’t have to make anyway. We are inextricably tied to God forever and always.

With credit to N.T. Wright and Marcus Borg who guided me with their book The Meaning of Jesus, and to Matthew Hurst for the photo above.