“Lord, is this the time when you will restore the kingdom of Israel?” 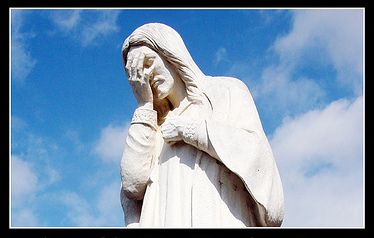 “Completely different ideas of “kingdom,” and for the latter I’m sending you to Jerusalem and beyond—to Judea and Samaria (the northern and southern kingdoms) and to all people in the rest of the world. So please don’t misrepresent my message. I’m not restoring the kingdom of Israel; I’m pointing out the reality that God restores all people and to Godself.”

It’s hard for the disciples to wrap their heads around how the coming of God’s kingdom wouldn’t coincide with the restoration of the kingdom of Israel. After all—how will we know if God wins if those whom we believe represent God don’t have a gross amount of power and wealth and control and prestige and awesomeness?

I’ve heard a number of friends, family, and public figures (specifically political pundits on certain networks with coordinated agendas) speak about some of the statements that Pope Francis has made regarding the poor. A frequently used statement sounds like, “He seems like a nice guy, and he’s doing a lot of charitable things, but he doesn’t understand economics.” The implication being that if nations were to act the way Pope Francis indicates they should, they would not become more prosperous.

I’m not economist, and I won’t enter a debate in which I pretend to be one, but can I just say…

What makes anyone think that Pope Francis is out to help the prosperous become even more so? Pope Francis, in his simple but profound gestures and his commentary of our global attitudes toward wealth and those without wealth, seeks to point us toward Jesus who came not to restore a singular prosperous kingdom, but to proclaim the restorative relationship we find in God.

The good news here is that even when we stumble into the familiar obsession with restoring and preserving our kingdoms, God meets us with grace.

The Rev’d Curtis Farr is the assistant rector of St. James’s Episcopal Church in West Hartford, Connecticut. He offers reflections on the lectionary readings for the upcoming Sunday. His website is FatherFarr.com, and his Tumblr blog is BowingToMystery.com.