Home > Blog > Did an Angel Really Visit Mary? And Does It Matter? 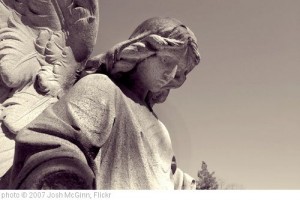 Many of my favorite Gospel verses come from the stories of Jesus’s birth and early years, including the words that Mary utters after the angel Gabriel informs her that she will give birth to a son conceived by the Holy Spirit: “And Mary said, ‘Behold, I am the servant of the Lord; let it be to me according to your word.’ And the angel departed from her.”


Let it be to me according to your word. Such simple words, indicating Mary’s assent to God’s call. Simple, but not easy.

This verse had a special poignancy for me in the Advent of 1998, when Daniel and I were preparing to move from Washington, D.C., to West Hartford. Leaving D.C., even though we were moving for a good job and to be closer to family, was wrenching. We had a full and happy life in a wonderful city. Despite the good life we’ve built here in Connecticut, we still feel homesick for D.C. Our longing for the vibrant and beautiful city is compounded by our longing for the energy and freedom of being twenty-somethings finding our place in the world.

As we prepared to leave in that Advent of 1998, I understood that we were giving up something precious, that the city where we grew into adulthood and met each other would leave a mark, and our move away would leave a scar. So I focused on Mary’s words: Let it be to me according to your word. We sensed that in making this move, we were following God’s lead, even though it was scary and hard.

How did we know we were following God’s lead? Well, we didn’t get visited by an angel, as Mary did. Our D.C. church focused a great deal on how to discern God’s call. While a few outliers shared stories of vivid dreams or other signs that made God’s call clear, most of us figured out where God was leading us using more ambiguous criteria—our deepest desires and talents; gut feelings, sometimes clarified in prayer; our own and others’ observations and intuitions. I have generally viewed angel visitations as poetic literary devices symbolizing divine-human communication, but not as something that really happens.

But I recently read a book, The Angel Effect by John Geiger, that has changed how I think about angels.* Geiger tells story after story of people’s encounters with a “sensed presence.” The stories have some common threads: In a moment of extreme stress (a car accident or plane crash, a near drowning, a moment of despair experienced by a binge-drinking alcoholic), a person suddenly feels the palpable presence of another being that exudes calm, benevolence, and love. Sometimes the presence gives instructions, such as by telling a drowning person in which direction to swim, or telling an accident victim to breathe slowly to conserve oxygen until emergency personnel arrive. Sometimes the presence is simply there, bringing a powerful sense of calm and well-being. Sometimes people feel the presence holding their hand, either to provide comfort or to physically lead the person. Sometimes the presence’s identity remains ambiguous, but sometimes it takes on very specific characteristics. One man, driving at night on a winding mountain road in a snowstorm, received detailed navigation directions from a middle-aged Mexican cleaning lady, of all people, who appeared in his car. Geiger himself, grieving after the death of his infant son, experienced a calming, healing presence in his home office one night. He was sure that the presence was, in fact, his dead son James, though the presence never said a word.

The people who tell these stories are from diverse backgrounds, and most are not particularly religious. Some of them refer to the sensed presence as an angel, while others aren’t sure what to call it. All of them are certain that the presence was both real and life-changing.

The “sensed presence” phenomenon is well-documented in scientific literature, and Geiger explores multiple theories that attempt to explain it in neurological or psychological terms. Perhaps in times of extreme stress, our subconscious overrides our conscious brain, quelling panic and helping us to perceive and use important environmental details to, in effect, save ourselves. Many people report that the presence is located over their right shoulder; perhaps the left brain, which controls the right side of our body and helps us interpret stimuli, among other things, creates the sensed presence to help us interpret and respond to extraordinary events.

Geiger presents numerous scientific theories, all of which seem reasonable, some of which have been replicated in laboratory experiments, and none of which explain the aura of benevolence and love that people report as key to their experience.

So, what is the answer? Are there really angels? Or are experiences of a sensed presence that provides comfort and guidance merely a trick of the brain?

Geiger concludes—and I would agree—that we don’t really need to answer those questions to believe in the power of such encounters. There is no doubt that the experiences people report are real experiences, with real consequences. People who were near death did not die. The comfort and peace that people felt during their encounter remained and were life-changing. Alcoholics stopped drinking, depressed people got better, drowning people made it to shore, accident victims survived, and Geiger began to heal from the devastating loss of his baby boy. Whether their encounters were with a real angel or were a function of their brains giving them just what they most needed at the hardest moments of their lives seems irrelevant in the face of how these encounters change lives.

Geiger concludes, “The fact is we don’t know what’s behind these episodes. The sheer number of explanations proves this.” He goes on, “I have been visited by an angel, if you’d like to call it that, in the form of the presence of my dead son. He did what angels do: he offered me hope, he comforted me, and he guided me…”

“He did what angels do…”

That brings us back to Mary, visited by Gabriel with his startling news. The people in Geiger’s book say that their angel, or presence, overflowed with a sense of calm that quelled their fear. In the Gospel accounts, the first thing that Gabriel says to both Elizabeth and Mary, and to the shepherds, is, “Do not be afraid.” The people in Geiger’s book gained a sense of resolve, certainty, and peace that remained for years. What strong resolve and peace must young Mary have possessed to do what God was asking her to do—to tell her betrothed husband that she was pregnant by the Holy Spirit, give birth in a stable far from home, raise a boy who was different than anyone else’s boy, see that boy perform miracles, and then be tortured to death on a cross.

I am intrigued by the ways that modern people’s encounters with angels, or some kind of benevolent presence, echo Mary’s and others’ encounters with angels in the Bible. I have often dismissed fellow Christians who speak of our “guardian angels” as being somewhat charmingly deluded. But now I wonder if I have been wrong to dismiss the possibility that angels are more than a lovely poetic device.

The Bible narrative tells the truest story there is, of God’s redeeming work in the world that God created and the people whom God loves. The truth of that story is not contingent on every jot and tittle of the Bible being factually true. What, exactly, inspired Mary to do what she did is less important than that Mary did what she did.

Thus far in my life, I have sensed God’s call through a murky mixture of intuition, prayer, desire, and circumstance. Perhaps that will be the case for the rest of my life, or perhaps some day I will experience a "sensed presence" or angel visitation. I pray that when God calls, I will be willing to step into the unknown despite fear and sadness and uncertainty, as I did when we moved from D.C. to Connecticut 15 years ago. I pray that I will always be willing and able to respond to God’s call, whether it comes to me via shaky intuition or a life-changing encounter, as Mary did: Let it be to me according to your word.

*Disclosure: I received a free copy of the book from the publisher in return for writing about it on my Patheos blog.