As many of you know, I fell on the ice a couple of weeks ago, and ended up with broken ribs and a few other injuries. So instead of spending the first weeks of December baking, shopping, and decorating while keeping up with my usual housekeeping and writing work, I've been spending many hours parked on my couch. While I'm not thrilled with the reason behind my lazy days, I've had lots of time to read. In this post, I'll share some of my favorite books from 2013, focusing on those with a Christian or faith angle. Perhaps one of these titles will be a perfect gift for someone on your list, or will help you enjoy a few lazy days of your own around Christmas.

This being St. James's, I had to start with a book on food! In many ways, Eat with Joy reflects and supports the food culture at St. James's, where we regularly focus both on the celebratory and community nature of food, and on issues around hunger, poverty, and justice. In Eat with Joy, Stone primarily reminds readers that food is a gift from a loving God who intends it for our good use and pleasure. She writes about the power of food to bring people together, build connections, and heal wounds. She also addresses food justice, writing movingly about factory farming and fair wages for farm workers—without a heavy guilt trip. Each chapter ends with a couple of recipes (most of them simple, and delicious!), as well as prayers to use at mealtime. Eat with Joy is a wise, refreshing antidote to our warped food culture in which we so often bring guilt, dogma, and misinformation to the table. Christianity Today just named it the top Christian Living book of 2013. (Disclaimer: Rachel is a close friend of mine. After my recent injuries, she sent me a four-pound jar of Jelly Belly Jellybeans, proving that she truly understands the healing power of food!)

Pastrix: The Cranky, Beautiful Faith of a Sinner and Saint by Nadia Bolz-Weber 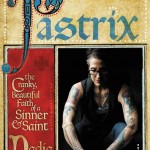 Bolz-Weber is a Lutheran pastor in the Denver area whose story and persona defy many stereotypes about who answers the call to ordained ministry, and why. A heavily tattooed former stand-up comic and recovering alcoholic, Bolz-Weber decided to pursue ordination after, as the only person of faith among her peers, she was asked to lead a memorial service for a fellow addict. This is her story of figuring out her ministry and finding God’s grace among the “cynics and alcoholics and queers.” Bolz-Weber’s cynicism, honesty, salty language, and frequent admissions that there are lots of people she doesn’t really like keep her from coming across as a holier-than-thou do-gooder. I loved her meditations on God, grace, and suffering, like this one: “Grace isn’t about God creating humans as flawed beings and then acting all hurt when we inevitably fail and then stepping in like the hero to grant us grace….It’s God saying, 'I love the world too much to let your sin define you and be the final word. I am a God who makes all things new.'" Did I mention that Bolz-Weber grew up in a conservative evangelical church where women were not allowed to be ordained? That fact leads to one of the most moving scenes in the book, when she tells her parents she is pursuing ordination. Bolz-Weber’s story is both surprising and ordinary, mundane and transcendent.

When We Were On Fire by Addie Ziernan

Named one of Publishers Weekly’s top religion books of 2013, When We Were on Fire is a moving, sometimes funny look into the evangelical world, and what happens when adulthood challenges an oversimplified, all-consuming faith. Ziernan was absolutely committed to the evangelical subculture as a teenager, wearing “WWJD” (“What would Jesus do?”) bracelets and organizing prayer rallies. Her first love was an intense young man destined for the foreign mission field. (I’m guessing most of you reading this never dated an evangelical boy. I did, and as I told Addie, her descriptions of conversations between her and her boyfriend gave me bouts of PTSD. But I digress…) As absurd or foreign as the trappings of evangelicalism might be to us Northeastern Episcopalians, it remains a powerful force in American religion and culture, and Ziernan’s memoir sheds a bright—but not unforgiving—light on it. After college and marriage, Ziernan underwent a crisis of faith, rebelling against both the superficial trappings of evangelicalism, as well as more troubling, substantive norms, such as around gender roles or what is meant by “salvation.” But while she became fed up with her tradition, she did not give up on God: “Even in your raging,” she writes, “you couldn’t forget that Story, couldn’t deny the way it rang clear and true in your ears.” She begins, tentatively, to search for a Christian community where mystery and paradox and gray areas are allowed to stand. She discovers that, “….maybe this is the way you move on. You find the small slivers of light, and you hunker down in them. You hole up in the still warmth of this kind of beauty and you wait….” This is the story of Ziernan’s moving on, and waiting, and beginning to discover a less certain, but far deeper faith.

Love and Salt: A Spiritual Friendship in Letters by Amy Andrews and Jessica Mesman Griffith

Friends Griffith and Andrews started writing regular letters to each other during Lent 2005, when Andrews was preparing to convert to Catholicism. These women are deep theological thinkers who use their regular correspondence to ponder eternal life and the fear of death, the wisdom of Teresa of Avila, how prayer works, how to eat communion wafers with reverence, and other weighty matters. They quote poetry and urge each other to read Pope Benedict’s writings (they are both Roman Catholic) with the zeal that I recommended Gone Girl to my book group. Their sharp intellects and unabashed love of theology are daunting. But two things keep their correspondence from being dry and inaccessible to readers (like me) who don’t keep piles of theology books on the nightstand. First, Andrews’s and Griffith’s letters include plenty of references to everyday realities, from an obsession with Little House on the Prairie reruns and frequent Tolkien allusions to job complaints and annoyance with their husbands. Their lives as wives, employees, mothers, and laypeople will be relatable to many readers. Second, the friends delve deep into big theological questions not as some sort of intellectual exercise, but because they are trying to make sense of their own lives. They are pursuing the knowledge and love of God not because they are intrigued by the idea of God, but because their lives depend on it. Nowhere is this clearer than in Andrews’s and Griffith’s writing about how God is, or isn’t, present when we experience great pain. About two-thirds of the way through the book, crushing tragedy hits. Nearly all of the letters from then on include some wrestling with theodicy—how God does or doesn’t intervene in human life, and what we are to make of seemingly random, crippling pain. (You can read my full review of Love and Salt on my Patheos blog.)

How the Light Gets In by Louise Penny 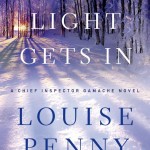 How the Light Gets In is the latest installment in Louise Penny’s Chief Inspector Gamache mystery series, chronicling the life and work of Quebec homicide detective Andre Gamache. I read How the Light Gets In, then immediately went back and read the entire nine-book series. The Chief Inspector Gamache books are typical “cozy mysteries,” with murder plots unfolding largely against the near-mythical backdrop of Three Pines, a tiny, hidden gem of a village in southern Quebec. The plots are intriguing, the characters well developed, and Three Pines is a place most of us would probably like to live. Woven into all of the stories is a subtle but powerful thread of grace. The characters in Penny’s novels are not religious; most of them only go to church for baptisms, weddings, and funerals. But Inspector Gamache and others carry convictions and live out of assumptions that are deeply Christian. In the world of Three Pines, forgiveness is necessary for healing, we are strongest where we are broken, wisdom and strength usually come from hidden or surprising places and people, and redemption and resurrection are always possible. The title of this latest novel comes from these Leonard Cohen lyrics: “Forget your perfect offering, there is a crack in everything, that’s how the light gets in.” In my own “cracked” state right now, those words speak an elusive but hopeful truth.

I hope you find one or more of these titles to be a good companion for cold winter nights, or just the right gift for someone on your list. Now that I’ve burnt through a lot of my “to read” pile, I’m looking for more recommendations. Share your favorite books of 2013 in the comments! (And no, they don’t have to be “religious,” although as the Louise Penny mysteries show, sometimes the least religious stories are nevertheless testaments to grace.)