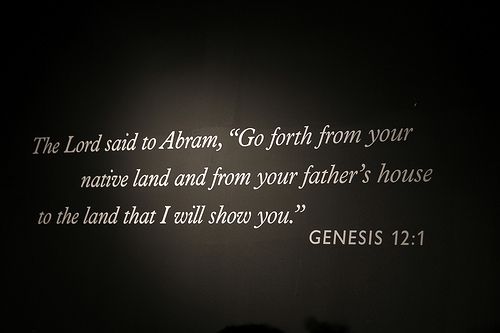 “Go from your country and your kindred and your father’s house to the land that I will show you. I will make of you a great nation, and I will bless you, and make your name great, so that you will be a blessing. I will bless those who bless you, and the one who curses you I will curse; and in you all the families of the earth shall be blessed.”

Okay, God’s relationship with Abram really begins with a command…an invitation really, but built into that invitation to leave home is the promise of a great, blessed nation. God says that they will bless Abraham, his nation, his name, and all those who bless him. And then God says they will curse those who curse Abraham and his etc.

I almost stopped writing on this passage right there, but whenever we hit a difficult part of the Bible, it’s probably time to go deeper rather than closing the book altogether.

What does it mean that God will curse those who curse Abraham? One interpretation we cannot ignore is the obvious one: God will (or already has) cursed enemies of the nation of Abram. While I doubt this passage from Genesis is ours, or any country’s, primary motivation for supporting Israel, the belief in this interpretation is widely embraced by many people.

As is usually true about interpreting scripture, we should probably put this passage firmly in its context—specifically its literary context.

Up until now, God and humanity have struggled to make their relationship work. Since Adam and Eve left the garden, it’s been something like long-distance (and that hardly ever works). Noah and his loved ones survived a flood that cleaned out tons of people, and a bunch of people tried to build a tower to heaven. Now God picks this dude Abram to bless and to be a blessing to others. God is setting Abram up to be one through whom that relationship between God and humanity is redeemed and made whole. And furthermore, “in [Abram] all the families of the earth shall be blessed.”

All the families? Like all the nations? The Jews and the gentiles?

If God’s purpose for Abram is to put together the pieces of this jumbled relationship between the created and their creator, then those who oppose that goal would naturally be “cursed” by virtue of their turning away from what is blessed.

In my mind I always go to Jesus’ Parable of the Prodigal Son (or Forgiving Father) when I’m confronted with questions about God’s nature when it comes to their children. Remember how the prodigal son basically proclaimed that he wished his father was dead, took his inheritance, and left home for good? And years later after his money had run out and his clothes were in tatters, he came crawling back—and his father simply ran out to meet him, embraced him, and provided a feast to celebrate the son’s return?

If our “Father,” if our God is that loving and forgiving and warm and embracing, why on earth would anyone want to leave home? Compared to the warmth of that relationship, anything else seems like a curse.

God’s relationship with Abram begins with a promise—the same promise Jesus affirms in the Parable of the Prodigal Son: God delights in us enough to want to be in a close, intimate relationship with us. That is a blessing worth passing on to others.