Home > Blog > Why Even the Smallest Good Work is Worth Doing

West Hartford sinks into controversy every few years. There was the furor over proposals for Blue Back Square, which inspired one resident to build an outhouse in his front yard to symbolize what would become of our fair town if we allowed developers to transform weedy abandoned car dealerships into high-end shops and luxury apartments. On arriving at my polling station to vote on the Blue Back proposal, an opponent told me that if I voted for the development, I was voting for my hometown to be "ruined." I've learned to endure the agony of living in a place where we have a first-run movie theater, Munson's chocolate shop, swanky wine bars, and expanded library a mere six-minute drive from home.

We've had a couple of contentious budget referendums, which sadly tend to pit older town residents against families with children in public school. Most recently, controversy is brewing over our high schools' traditional Native American mascots. Hall High School retired its "warrior" mascot a couple of years ago (though they still have a school spirit club known as "the Reservation"), while many current and former Conard students are fighting to retain the "Chieftain" mascot. As a Conard graduate and parent of three kids who do and will go there, I believe that Native American mascots of any kind are on their way to becoming about as socially acceptable as dressing in blackface or making snide comments about Jews and their money. Several St. James's clergy members have written to the Board of Education to call for the retiring of Conard's Chieftain mascot, and several parish students and families are actively supporting the effort as well. This blog post, however, isn't going to be about the mascot issue. (If you want to know more, you can read this post on my Patheos blog, in which I linked to my Courant op ed on the subject and also reprinted an intriguing interview with a 2001 Conard graduate whose views on the Chieftain mascot have changed.)

This post, rather, is about a particular type of response I've heard over and over from people who are opposed to retiring Native American mascots. This type of response takes several forms:

"Stop wasting everyone's time with such a superficial, minor issue. What we really need to be talking about is [the economy/health care/Connecticut jobs/etc.]." "What difference will this really make to Native American people? Their problems go way beyond mascots. This is such a small thing and changing it won't really do anything." "If you really cared about Native Americans, you would send money or go work on a reservation, addressing the poverty that's the REAL problem."

You could replace the references to Native American mascots in these statements with references to any small-scale effort to address any sociopolitical problem, and you'd have a snapshot of a sadly common argument against progressive causes. The worldview from which these sentiments arise—in which scarce resources must be doled out based on who and what is deemed most worthy, doing good over here means we can't possibly do good over there, and everything is evaluated in terms of cost rather than possibilities—is dominant in our capitalistic, competitive culture. And it is dead wrong, both practically and theologically.

Small, grassroots efforts, which seem so weak and tiny when set against the massive injustice, suffering, and violence that feed our bloody news cycle, do make a difference. Just as making big changes in our personal lives (getting a better job, improving our health) requires lots of small steps (studying for tomorrow's test in a professional degree program, heading to the pool on a cold morning when bed is a far more attractive option), moving our culture toward greater equality and justice requires lots of small steps. Martin Luther King, Jr., didn't begin his world-changing work by leading marches on Washington and meeting with the president. He started by studying theology (talk about something that people dismiss as practically useless!), preaching, and leading local civil rights efforts, like the Montgomery bus boycott. The civil rights movement was built on a foundation of small, potentially inconsequential actions—a woman refuses to move to the back of the bus, students sit at lunch counters, volunteers in Mississippi go door to door registering voters.

From a practical standpoint, we should be suspicious of arguments against doing one small good thing because it's too small, or because it will distract us and take resources from other good things that also need doing. History reveals that, in the words of Margaret Mead, we should, "Never doubt that a small group of thoughtful, committed citizens can change the world. Indeed, it's the only thing that ever has." 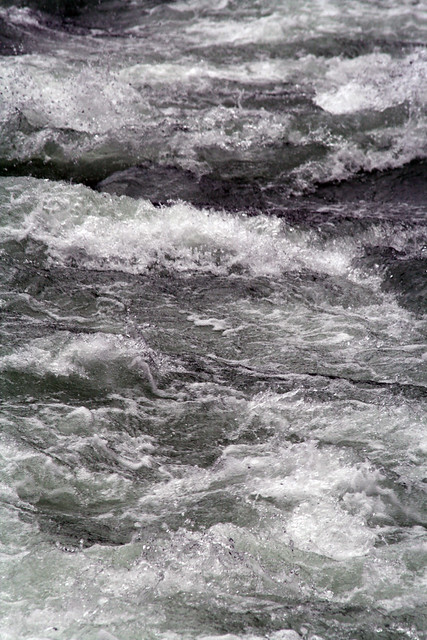 Theologically, the notion that justice must be carefully parceled out based on who needs it most or where our efforts will make the most visible difference is more than just wrong. It's a heresy, a denial of the God we follow. The God revealed in Jesus Christ is the ultimate source of everything good, of justice, mercy, and love. If our God is infinite and everlasting, then so are those qualities of justice and mercy and love that arise from God's very being. It is impossible, therefore, for one effort to bring about greater justice over here to take away from another effort to bring about greater justice over there. Justice isn't like a bucket of water to be doled out to those most deserving, or sprinkled over those places where it will have a greater impact. Rather, justice is like a river being continually fed by our small acts, each small work acting as a spring that, joining the river, only increases its power and mass.

Jesus's ministry on earth was defined by small acts. He didn't wave his hand over a town, chanting prayers and waiting to see every sick or injured person rise from their beds; he healed individual people, calling them by name, connecting with them through his hands, his robe, even his spit. Jesus didn't host banquets to feed all the hungry people in the area; he ate in people's homes, with them and their families. While Jesus preached to crowds now and then, it wasn't always by choice; he seemed more naturally inclined to talk to people one on one, as with the woman at the well. And in the mass feedings that started with a few loaves of bread and a few fish, Jesus showed us how even small acts of care are multiplied in God's economy, so that ultimately all are filled and satisfied—not because the economists and politicians and voters focus on big problems at the expense of little ones, but because every act of mercy, justice, and love is born in the heart of our infinite God and is therefore infinitely powerful, capable of bringing about change far beyond our limited vision of what's possible and prudent.

Caring about and working for justice can be frustrating, if not downright depressing. The problems are so big, and our efforts feel so small. It can seem foolish of God to entrust us with the works of mercy that help usher in God's kingdom. But we know that God's foolishness is wiser than human wisdom. We know that every small step toward greater justice, mercy, and love is not a waste of time nor a distraction; our tiny acts open cracks in the world's cynical, calculated, competitive facade, through which God's immeasurable, infinitely powerful grace can pour. Knowing the God from whom all acts of justice and mercy arise, we can say, as Helen Keller did:

Why the Secular Age Is Good for the Church