Home > Blog > Looking for God in (Another) Long Winter

Below is an excerpt from a blog post I wrote here exactly one year ago this week. I thought it worth reposting as a reminder that we've been here before—in the seemingly endless howling monotony of polar vortices and immovable piles of snow. We've been here before, and it did end. Spring came. So did summer. They will come this year too. In the meantime, we might as well think about what wisdom winter offers.


On a wide-ranging Facebook comment thread, a friend posed this question: “Who do we need to toss into a volcano to make this stop? Why do the weather gods hate us?” It was a joke, obviously. She’s a fellow Christian who doesn’t believe in “weather gods,” and none of us live near a volcano. (If we did, we might not be so COLD.)

In light of this never-ending winter, I’ve been thinking about our tendency to personalize the weather, to relate to it as a living entity capable of making us miserable, to get angry with it, to wonder what we did to make it treat us so poorly.

It’s no wonder that ancient peoples ascribed weather and other unpredictable, troublesome happenings to a god or gods looking to send a message or enact a punishment. It’s no wonder that people turned inward to figure out what they had done so wrong to make “the weather gods hate us.” This long, wet, icy, snowy winter isn’t just uncomfortable and inconvenient. It is disorienting, upsetting, maddening, depressing. This awful winter weather we’ve been having feels personal, as if it has been sent by some mysterious force to shake us up (and then spit us out, cold, pale, lethargic, and five pounds heavier). If I didn’t believe in God, I’d be wondering in all seriousness what I had done to make the powers that be so angry that we deserve this awful winter. 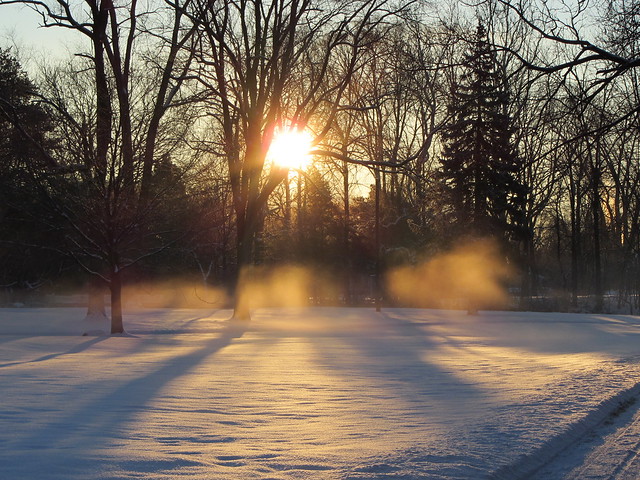 I think we tend to personalize the world around us—to see ice storms as senseless and vindictive punishment, to embrace the first sunny 70 degree day as a gift meant just for us—because the world is, in a sense, personal. I don’t believe that God micromanages the weather, that God sends storms or sunny days for particular reasons. This wouldn’t make much sense, given that the rainy day that answers a farmer’s prayer will ruin someone else’s outdoor wedding. But I do believe that God created weather, because God created this world where sunshine and blizzards and warm rain and thunderstorms are all possible. The world God created is a personal one. As believers, we don’t perceive the earth as a random occurrence of atoms and substances and cosmic explosions, even if we accept theories concerning big bangs and evolution. We believe in a world arising out of God’s impulse toward beauty, God’s desire for relationship, God’s nature as a lover in need of something and someone to love. We rail against the weather in part because we understand that we are living in a world where the feel of sun on one’s face, the smell of damp soil, the sound of pounding waves, and the sight of a blooming hillside are truly gifts of a God who is warmth and growth and strength and beauty, and who, in bestowing such gifts on us, gives us himself.

I expect we’ll continue to rail against winter for a few more weeks, yelling at the snow and ice, wondering what we can do to make it stop. But we’ll get through it. Eventually, all this moisture will seep into the thawing earth and bring forth crocuses and daffodils, azaleas and rhododendrons. We’ll be firmly reminded of another defining aspect of God’s world—the continual possibility of redemption and restoration. The hard truth of God’s world is that even the snow and ice we despise by this time of year is a gift, a necessary part of the stunning, wondrous creation made just for us.

Right now, all I can see is death. The death of color. The death of growth. The death of warmth. For me and my unsteady joints, even the death of freedom. I stand outside, throwing a ball for the dog who is getting too few walks, too little outdoor playtime. The wind creeps into the gaps in my fleece coat. The street is too quiet; no one lingers outside any longer than necessary. All is white, gray, and black. My bones ache more than usual. As the sun sets, I note the slightest hint of pink in the sky—the only color, it seems, for miles. Our God hasn’t sent this awful winter as any sort of punishment, and does not ask us to throw our sacrifices into the volcano. Our God promises life after death. That slight blush in the sky isn’t much to cling to, but I do. It’s no rainbow, but it’s promise enough.