Home > Blog > Into the Fire: Who touched your mouth and made YOU a prophet? 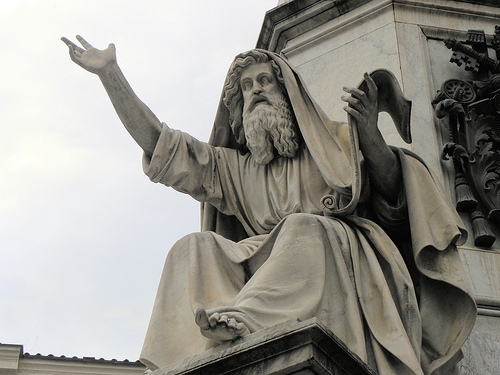 Jeremiah tells us that the word of the Lord said to him that before it formed Jeremiah in the womb, it knew, consecrated, and appointed him a prophet. Jeremiah responded saying that he was only a boy. The Lord then said to him not to say that, told him to speak whatever the Lord commanded, and advised him not to be afraid of those to whom the Lord sends him. Then the Lord touched Jeremiah’s mouth and put the Lord’s words inside and appointed Jeremiah “to pluck up,” “pull down,” “destroy,” “overthrow,” “build,” and “plant.”

The first part is clear enough: the Lord somehow spoke to Jeremiah when he was but a boy, appointing him as a prophet. The tough part to swallow is the way in which the Lord gave Jeremiah the words to say when he began his career of prophethood.

The Lord touched Jeremiah’s mouth and put words inside?

This sounds like he’s self-legitimatizing just a little bit. We’re supposed to listen to him just because he claims that the Lord put these words in his mouth?

Now we’re chewing on the issue of authority—what makes the prophets or any of scripture worth taking seriously as the Word of God?

Timothy 3:16-17 is often cited as the passage legitimizing scripture:

All Scripture is God-breathed and is useful for teaching, rebuking, correcting and training in righteousness, so that the servant of God may be thoroughly equipped for every good work.

Is Tim referring to what was scripture at the time (some form of what we know as the Hebrew Scriptures or Old Testament)?

And what does Tim mean about scripture being “God-breathed”? This seems to be the question-at-hand in any knuckle-busting fight between “those nasty God-hating liberals” and “those stupid superstitious conservatives.” And whether or not you identify with either of these groups, it is good for those who pay any attention to scripture to think for themselves about what the phrase (about scripture being “God-breathed”) means.

And it is an absolutely necessity that followers of Jesus Christ not be followers of Holy Scripture—instead, discerning Christians read Jeremiah, the rest of the Hebrew Scriptures, the letters, and the four accounts of the Gospel and digest them.

Maybe God doesn’t literally put words in our mouths as Jeremiah artfully describes, but as we experience God in our relationship with each other and with scripture, we, too, are appointed to a calling within God’s ministry to creation.