Home > Blog > How Do We Respond to What's Happening in Iraq?

This week, horrific news is coming out of Iraq, where Islamic extremists are reportedly harassing and killing non-Muslims, including Christians. While reports of Christian children being beheaded are unconfirmed (please God may these reports be false), the situation for religious minorities (including the Yezidis, members of a Zoroastrian group who were herded onto a mountaintop and stranded there without food or shelter) is dire, as people representing the Islamic State in Iraq and Syria (ISIS) try to force conversions to Islam with threats, intimidation, and violence. The "Vicar of Baghdad," Anglican cleric Andrew White, has reported that a child he baptized was killed by ISIS forces. As we spoke the Nicene Creed together in church yesterday, I did so with both grief and gratitude, as I considered how, if I were an Iraqi Christian, these words would mark me and my family as targets of ruthless zealots committing atrocities in the name of God.

Besides a deep gratitude for our country's freedom of religion, I have a mix of emotions about the news from Iraq. Grief. Anger. Bewilderment about how I can respond as an individual, and how our government can respond. Underneath is another emotion, harder to pin down and explain. It's not quite guilt; there's no question that the people who are most to blame for the atrocities in Iraq are those perpetrating them. But I'm also aware of how American policy and interventions in the Middle East—how actions taken in my name as an American—have played a role in fostering a chaotic, divided society where extremists can effectively peddle their version of the truth. Beyond that, I'm uncomfortably aware of what Christian theology says about the people on both sides of the violence. The Biblical narrative tells us that we are all—all—fallen, sinful, broken, capable of violence and hatred and division. The Biblical narrative also tells us that we are all—all—beloved people made in God's image. This theology links me to both victims (of all backgrounds, not just Christian) and perpetrators of the Iraq violence, to both oppressed and oppressors. 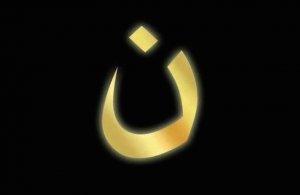 It is natural to read difficult news and wonder what we can do to help. In this case, some of the answers are familiar. We can pray. We can give money to organizations working to help victims and build a healthier society in Iraq. But as Christians, we can also think theologically about what led to this nightmare and how we can support the Iraqi people in turning things around. I've been moved and challenged by the reflections of Jeremy Courtney, who has lived and done charity work in Iraq for a number of years. Courtney started a social media movement, #WeAreN, to encourage Americans to show solidarity with those being targeted by ISIS. He encouraged people to use that hashtag and the Arabic character for "N" (which stands for "Nazarene," and is the symbol used by ISIS forces when they are marking the homes of Christians) as a way of publicly standing with victims. In this post for Sojourners and again in this interview with Religion News Service, however, Courtney laments that American Christians seem to be using the hashtag incompletely, declaring solidarity with Christians but not with the many other non-Muslim groups targeted by ISIS. Courtney empathizes with Americans' sense of bewilderment and futility concerning the events in Iraq. But in the Sojourners post and in a Huffington Post article, Courtney reminds us that even the evildoers, not to mention the people of other religions being targeted by ISIS, are made in God's image—which we must remember if we have any hope of effectively addressing the complex, deep-seated problems that lead people to violence and intolerance. Courtney speaks to us, and urges us to act, not solely as Americans, not solely as Christians, but as human beings, fallen and sinful and broken as all human beings are, who turn too readily to violence to fix the problems we see. Courtney writes:

We need a long-term plan, not just a short-term fix. There are agencies helping Christians, Yezidis, Turkmen, Shabak and others, and those services are necessary. But this isn't only about what Obama or Maliki must do now. The Christian church needs to reconsider its relationship with violence; that is part of what has landed us and others in this dire situation. We cannot carp about Christian persecution and not talk about violence and our use of violent solutions.

So what can we, as Christians, do in the face of the atrocities unfolding in Iraq? We can pray. We can give. (Below are some ideas on how to do those things effectively.) And we can consider the events in Iraq in light of what we know about human nature and God's nature, about violence and resurrection, about devastation and hope, about a God who suffered on the cross and who loves everyone, about the futility of violence and our own complicity in it, about how nothing is impossible for the God we love and who loves us.

If you want to pray for the situation in Iraq - Christians in Iraq continue to say that prayer is what they most want and need from brothers and sisters around the world. The "Vicar of Baghdad," Canon White has said, "I have three ‘P’s that I always mention, which is for Protection, Provision and Perseverance. We need protection, we need to provide for these people and we need to keep going.” Let's join him in offering those prayers.

If you want to donate money - Canon White's organization, which even in less dire circumstances provides much-needed humanitarian aide via St. George's Anglican church and clinic in Baghdad, is called the Foundation for Relief and Reconciliation in the Middle East. You can learn more about their work, and donate if you wish, here. Many other organizations have programs in Iraq that are in dire need of financial support. On Faith lists some of them here.

Can you study the Bible by reading the Qur'an?