Home > Blog > A God Who Wants to Be Noticed

I used to dread summer.

Perhaps this is because I often had surgeries scheduled for the summertime, when I wouldn't have to miss school. I know it's because one of the more baffling traits associated with my bone disorder is heat intolerance and excessive sweating. (I know. Gross.) When I got older, far past the summer surgery stage, I spent most summer days working in an overly air conditioned office and trying to arrive at work without being utterly drenched after my morning walk to the subway in Washington, D.C.'s swampy climate. For the first three-plus decades of my life, summer was something to be endured, not enjoyed. 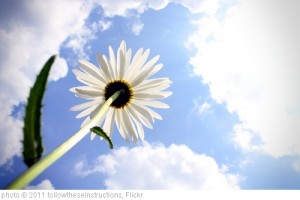 But that started to change perhaps six or eight years ago. While fall is still my favorite season, I've learned to savor summer. Having kids has helped. I have learned that kids with dirt-blackened feet and popsicle-sticky chins are a sure indication of a good day. I have watched my children, freed of heavy clothing and school schedules, content to spend hours talking with a friend as they lie side by side in the hammock, or running through an icy cold sprinkler. I have come to understand, in a way I struggled to do as a kid myself (despite how I savored after-supper trips to the pool with my dad and weeks on Cape Cod), how summer makes time a gift instead of a burden. As my arthritis has worsened and adult-size worries have piled up, I have learned to seek the sun's healing power for body and mind.

Summer, for me, has been redeemed, by time and motherhood and aching joints that quiet at the sun's touch.

Redeemed. Redemption. Those are words we associate with our Christian faith, but what do they mean?

According to my Oxford Companion to the Bible, to "redeem" someone is to do something for them that they are unable to do for themselves. Most commonly, this involves a financial transaction, such as paying off someone else's debt or paying a ransom to free someone in captivity. God, as ultimate redeemer, redeems the Israelite captives from Egypt and redeems all of sinful humanity through Christ's death, "in that [God] gives humanity the forgiveness that humanity could not give itself....Moreover, God redeems Christians from slavery to sin in order to adopt them as his children..."

When someone is redeemed, they are restored to freedom (from debt, from imprisonment, from sin, etc.). That restoration costs something, a cost that is borne by someone other than the redeemed one. Redemption involves someone or something being restored to their/its proper place, at a price.

So I think of summertime as being redeemed, restored to its proper place as a time to be savored, not just gotten through. That restoration has come at the price of motherhood and advancing arthritis (not to mention years!). I have likewise written about my body being redeemed—being restored to a place of honor and gratitude from a place of pain and brokenness, a restoration brought about when I paid the steep but wondrous price of bearing and nurturing three children with a body that had previously disappointed and limited me more often than it empowered me.

I am a Christian because I believe and cling to the fundamental doctrines of our faith—that God created the world and all that is in it, that we are made in God's image, that Jesus Christ lived, died, and rose to reconcile all people to one another and to God. Beyond doctrine, I believe what Christianity says about the world and how it works—that love is the driving force behind the ongoing story of creation; that love and life are more powerful than evil and death.

Because we don't have to look farther than the newspaper's front page or our Facebook news feed to see plentiful evidence that evil and nonsense seem to be in control far more often than good and wisdom, a core faith practice for me is to look for how redemption and resurrection are happening not only in the pages of the Bible, but right here, in my life and my community.

So I see redemption in how I've learned to enjoy summer and appreciate what my limited body can do instead of what it can't. I see "everyday resurrections" in the story of the dark, depressing house we bought seven years ago, which is now a light-filled, warm home for a growing family, or in the way my hydrangeas are preparing to bloom even though the terribly cold winter killed off all of last year's growth.

Noticing phenomena central to the Biblical narrative, such as redemption and resurrection, in my everyday life is far from proof that that there is a God or that Jesus Christ rose from the dead. These phenomena nevertheless shore up my faith; they convince me, day after day, that the Biblical narrative is true in the way that all of the best stories are true. They help me believe that our existence is not mere biological accident, and that our world is ruled by laws instituted by our creator—laws about life overcoming death and love overcoming evil and the stubborn possibility of redemption for all things and in all circumstances. Such laws are just as profound, simple, and necessary as natural laws governing gravity and light and motion.

I just re-read John Green's best-selling novel The Fault in Our Stars after taking my girls to see the movie. (Yes, we all cried. Yes, I loved it, and will probably take the girls to see it again.) One thing I loved about this story is how the characters, caught up in the awful realities of terminal cancers, talk about God and the afterlife. None of the main characters are Christians or otherwise religious. (In fact, a common criticism of the movie is that the sole explicitly Christian character, a young man who leads a cancer support group for teens in a church basement, is played as far more silly and inept than he was written in the book.) But the main characters do talk about what they do and don't believe, and the narrative leaves plenty of room for the possibility of Something with a capital "S," as Augustus (one half of the dying-of-cancer teenage couple) puts it.

In one scene in the novel, Hazel (the other half of the dying-of-cancer teenage couple) and her dad are watching reality TV together just after Hazel has learned that Augustus's cancer, thought cured, had metastasized and would kill him. Hazel's dad first says that he doesn't know what he believes about suffering and meaning and what happens after we die. But then he says this:

This is why I try to notice, and articulate, the elegant redemptions and resurrections happening all around me. I believe the universe, or more precisely, its creator, wants to be noticed. In noticing life and love and healing and connection and resurrection and redemption, and naming those occurrences for what they are, we witness to the God who made a world in which such everyday miracles are not just possible, but inevitable.

Ellen Painter Dollar is a professional writer and member of St. James’s Episcopal Church. She blogs for St. James’s every Monday, offering reflections on current events, family life, and parish life. Or sometimes, when life is a little nutty, she blogs on Tuesday. Like today.