The face on this week’s People magazine cover is Brittany Maynard, a 29-year-old, recently married woman who went public with her plan to take a fatal prescription on November 1, rather than live with her terminal brain cancer until its deadly end. Her reasons include not merely avoiding the suffering she knows she will experience, but also protecting her loved ones from the awful reality of watching her deteriorate.

Maynard shared her decision with the national media with the support of an organization that is lobbying for assisted suicide (or “death with dignity,” as its proponents prefer) legislation in more states. Many are calling Maynard’s decision brave. I think she is indeed brave for her willingness to speak out about this most difficult decision. Knowing on a much smaller scale how hard it is to speak up, out of personal experience, about a controversial topic, I’m grateful for her willingness to go out on a limb and invite us all to join her.

But her decision—and the notion of assisted suicide in general—troubles me deeply, for a couple of reasons.

I’m troubled by how easily we assume—in this culture that looks for salvation from the limits of the human body in punishing exercise, restrictive diets, and ever-more-sophisticated medical technology—that life in an impaired body is not worth living. I’m troubled by how many people responded to the news that actor Robin Williams had committed suicide shortly after a diagnosis of Parkinson’s by saying, “Oh! Now it makes sense.” I know that people meant no harm. But what that response says fundamentally is that it makes sense for someone with a serious disability or illness to prefer death over life. People living with disabilities encounter this attitude all the time. My friend Michelle, who has the same bone disorder I do and uses a power wheelchair when she’s out and about, has had people say to her, “I’d kill myself if I were like you.” I’m not even making that up. That death is preferable to living with limitations and pain is a prevalent attitude in our health-worshipping culture, and I worry that assisted suicide reinforces it to a frightening extreme.

I’m also troubled by the fact that we, as Christians, have a lot to say on the subject of suffering, and why upholding human dignity might mean enduring suffering instead of overcoming or ending it by whatever means necessary—and we’ve generally done a terrible job of saying it.

Unfortunately, when many people consider what our faith has to say about suffering, they think first of ridiculous theological non-truths that only sound wise, until you really think about how stupid they are. Christians are famous for telling people (notably oppressed people) that they should suck up their miserable lot in this life because…HEAVEN! We like to say stuff that isn’t even in the Bible (“God helps those who help themselves,” or “God gives special children to special parents,” said when a child is born with a significant health issue), or take stuff that is in the Bible and misquote it so badly that we alter the meaning (“God won’t give you more than you can handle,” which is a misreading of 1 Corinthians 10:13).

A number of Christian writers have responded to Brittany Maynard’s decision. Fortunately, they mostly did not trot out such terrible bits of warped theology. Some of them said beautiful things: Kara Tippetts, a mother of four who is also dying from cancer, wrote to Maynard, “I get to partner with my doctor in my dying, and it’s going to be a beautiful and painful journey for us all. But, hear me— it is not a mistake —beauty will meet us in that last breath.” Others were more strident: Joni Eareckson Tada, who writes frequently about faith and disability, wrote, “[The journey toward death] must not be disregarded or brushed aside without thinking twice about the God who alone has the right to decide when life should begin and end.”

These and other responses share a key flaw: They used words and espoused ideas that are only meaningful to those who share Christian beliefs. This approach, obviously, will fail when we’re talking to people who don’t claim a Christian faith for themselves.

So what is our role in this debate, as Christians? A commenter on a Facebook thread in which I was participating earlier today said that perhaps our role isn’t to oppose assisted suicide legislation, but to offer a better way to approach terminal disease, and all the pain, dependence, and loss that precedes an apparently inevitable death.

Christianity does have something important (and I believe, better) to say about suffering and dying—something that is better and more beautiful than pre-empting death. That “something” is twofold. 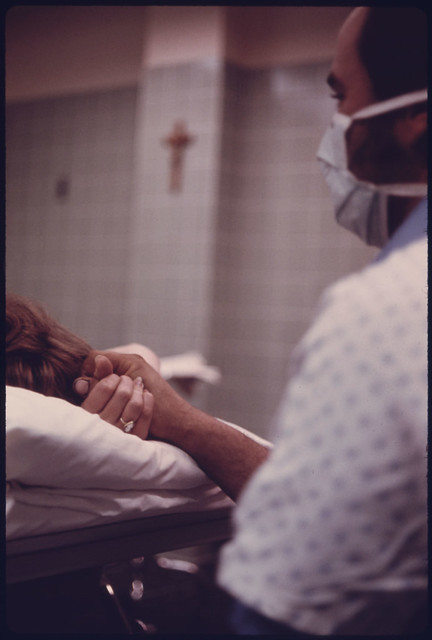 First, those crosses we wear around our necks, put up on our walls, and turn toward during the Gospel reading each week say something revolutionary, even unique, about human suffering and God: God, in Jesus Christ, has known firsthand the worst sort of human suffering, the suffering of being utterly forsaken, by other people and by God. God is present in our suffering not merely as a kindly parent or compassionate bystander, but as someone who has been there. And what, really, do we need most urgently during our worst moments? We need the presence of those who care for us. We need to know we’re not alone. We need someone to stay behind after the post-funeral reception is over, cleaning up and just being another living presence in the home that feels so desolate without our beloved one who just died. We need someone sitting by our hospital bed, even if we’re too doped up to hold a conversation. We need someone to respond to our tears with a hug now, and maybe a phone call tomorrow, even when—maybe especially when—they don’t know what to say.

It’s remarkable, really, the notion that God is not only present in our sufferings, but is truly empathetic, because God too has suffered through the absolute worst things that can happen to human bodies and spirits.

And about the ninth hour Jesus cried out with a loud voice, saying, “Eli, Eli, lema sabachthani?” that is, “My God, my God, why have you forsaken me?” (Matthew 27:46)

But the Christian story doesn’t end with the crucifixion. The next part of the story—resurrection—leads to the second vital thing that Christianity has to say about dying and suffering. The resurrection tells us many things, but one of the most fundamental is that even in the most severe suffering, there is the possibility of goodness, of redemption.

The notion that suffering can be redemptive does not mean that we ought to gloss over pain to get to the good parts. We often move far too quickly from empathetic (and often most helpfully, silent) presence to, “Here’s what you can learn from this,” or “Let me tell how I ultimately learned to be grateful for my pain, and you should be grateful too!” This is poor pastoral care, and it also assumes that goodness comes only after the fact, in what we learn or how our suffering changes us.

This is not to say that joy is a compensation for loss, but that each of them, joy and loss, exists in its own right and must be recognized for what it is...So joy can be joy and sorrow can be sorrow, with neither of them casting light or shadow on the other.

The redemptive possibilities in suffering don’t transform suffering itself. They don’t make suffering better or other than what it is, which is awful. But those possibilities can transform our response to suffering. Instead of approaching pain as something to be avoided at all costs, we learn to approach darkness, even of the most terrible, inevitable kind, with eyes open for the possibility of light breaking through.

My friend Karen, writing about the Maynard case at Think Christian, turned to literature (my personal favorite source of revelation!) to argue for why orchestrating one’s own death in pursuit of a certain kind of “dignity” might close off the dignified possibilities of death accepted on its own terms. Karen quotes from George Saunders’ short story Tenth of December (from his story collection of the same name).

The [tenth of December] is the date that a character, also terminally ill, has chosen to end his life. Like Brittany Maynard, Don Eber does not want to subject his family to his suffering and imagines his choice to be the heroic one. But his suicide is interrupted by the chance to be truly heroic (spoiler alert) by saving the life of a young boy. After doing so, Eber returns home. He has an epiphany which reveals the meaning in letting himself be cared for in his dying: “Why should those he loved not lift and bend and feed and wipe him, when he would gladly do the same for them? He’d been afraid to be lessened by the lifting and bending and feeding and wiping, and was still afraid of that, and yet, at the same time, now saw that there could still be many - many drops of goodness, is how it came to him - many drops of happy - of good fellowship - ahead, and those drops of fellowship were not - had never been - his to [withhold].”

I would never try to convince Brittany Maynard, who has made a decision according to her conscience, the laws of her state, and whatever faith she may or may not have, that she should change her mind based on what I believe. I don’t think I could, anyway.

But I will try to convince my fellow Christians that we have something better than assisted suicide to offer those who naturally fear the pain, mess, dependence, and fear of an inevitable painful death.

Our culture is confused about suffering, choosing to avoid it to such an extent that we take death into our own hands, while simultaneously lauding people who voluntarily take on pain and struggle, through extreme fitness or climbing Mt. Everest, for example. (This makes me wonder if deep down, we understand that healing happens when we figure how to live fully with affliction, rather than try to overcome it at any cost. If our life doesn't offer us enough pain and struggle, we go find some.) Into this strange void, Christianity has something vital to say about how life and death and pain and suffering and joy and evil and goodness all work together—somehow, unbelievably—for good, though not usually in the ways we would choose. I’d like to convince us that instead of writing fruitless and, in some cases, condescending open letters to Brittany Maynard, we should do a better job of living lives that humbly acknowledge—even rail against!—unavoidable pain, model God’s empathetic presence with people in pain, and never stop looking for the “drops of goodness” that are built into a world where light, inexplicably, unexpectedly, shines through the darkness.

The Dismembered Body of Christ