Home > Blog > Why I (Sort of) Believe in Miracles

I just re-read Unbroken by Laura Hillenbrand, which is the true story of Louis Zamperini—Olympic runner and American soldier who endured a plane crash, more than a month on a raft on the Pacific Ocean, and almost two years of abuse and starvation in Japanese POW camps during World War II. (Unbroken will be a feature film, directed by Angelina Jolie, released this December.) When I finished the final chapter, I realized I was feeling something odd and unexpected: envy. 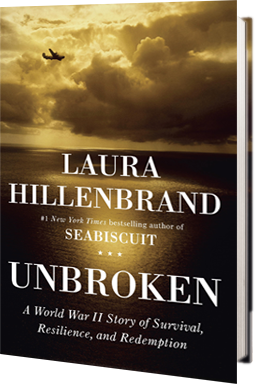 What would make me envious of someone who endured not one but several of the absolute worst fates to befall human beings? I was envious not of Zamperini's harrowing story, but of the thread of grace that runs through it, the ways that God's hand seemed to reach right down and touch Zamperini in clear, personal ways. Throughout Unbroken, Zamperini escapes certain death over and over, often in inexplicable ways. When his bomber crash-landed in the Pacific, he was pulled downward, tethered to the wreckage by a slew of electrical cables. He passed out. Seconds later, impossibly, he regained consciousness (despite having been pulled deeper underwater) and, again impossibly, the cables that had ensnared him were gone. He surfaced, realized he couldn't possibly swim to the life raft that was rapidly floating away, then noticed the raft's rope passing right in front of him, where he could easily grab it.

Weeks later, Zamperini and his two starving companions thought rescue might have come when they noticed a bomber flying toward them. But it was a Japanese bomber, not an American one, and the pilots began strafing the three men with machine gun fire, over and over and over. Only Zamperini was still robust enough to jump into the water to protect himself from the bullets, while his two comrades lay helplessly in the rafts. When the bomber finally left them, they looked at the bullet holes left behind. Somehow, although the rafts were full of holes, and though there were even bullet holes in the small inches of space that lay between the two men, none of the men were hit.

Zamperini and one of his companions were finally rescued by Japanese soldiers when their raft got to the Marshall Islands. (The third man had died of starvation.) Although their rescuers treated them well, soon the Americans were turned over to others who did not. Zamperini began his worst ordeal yet, ultimately being imprisoned in four different POW camps, where he was beaten and conscripted for slave labor, fed measly rations of half-rotten food, and often had only the cotton shirt on his back as protection from the bitter cold. He learned years later that in his first prison, on the island of Kwajalein, his captors had been ordered to execute him. But at the last minute, someone in the Japanese hierarchy intervened, believing that a prisoner of Zamperini's renown (because of his record-breaking run at the 1936 Olympics) was too valuable to execute.

Zamperini eventually returned home to California, where he married and had a daughter. But he was haunted by nightmares and flashbacks, consumed by revenge fantasies involving a prison guard who had treated Zamperini with particular contempt. But ultimately, the miraculous ways in which Zamperini survived his ordeals led him to a new life of faith. Dragged to a Billy Graham crusade by his wife, Zamperini sat, angry and wound tight, listening to Graham's assurance that God is active in the world.

Louie found himself thinking of the moment at which he had woken in the sinking hull of Green Hornet [the bomber], the wires that had trapped him a moment earlier now, inexplicably, gone. And he remembered the Japanese bomber swooping over the rafts, riddling them with bullets, and yet not a single bullet had hit him, Phil, or Mac. He had fallen into unbearably cruel worlds, and yet he had borne them. When he turned these memories in his mind, the only explanation he could find was one in which the impossible was possible.

Finally, Louie recalled one day on the raft, when they drifted into the supernaturally calm waters of "the doldrums," and despite starvation and pain, he was overcome with gratitude and the sense that the beautiful water and sky were being offered directly to him as a gift. That night at the Graham crusade, he embraced Christian faith. He never had another flashback. He poured all his liquor down the drain and never experienced another craving. Instead of indulging in revenge fantasies, he eventually traveled back to Japan to speak to, and shake hands with, some of his captors.

I'm envious of Louis Zamperini because of how straightforward and obvious God's miracles appear in his life. I'm envious because of how completely he moved from old life into new. I'm envious because, by his own account, much of that transition was easy. Most people don't turn our lives around so completely and so permanently all at once. Most people don't heal from psychological and physical abuse in one evening, going directly from sleepless nights racked by flashbacks to never having another flashback. Most recovering alcoholics aren't immediately and forever freed from cravings.

I think of how we read the Bible, with all those voices from heaven and angels and interventions and miracles, and wonder why God was so there for the Old Testament Israelites and for Jesus and his disciples, and yet seems so far away to us. Where are our miracles and angels and voices from heaven? Was God just more present back then? I don't think so. I think that obvious miracles and interventions—the angel choirs and parting seas and voices from heaven in the Bible, the disappearing wires and missing bullets of Louis Zamperini's life—have probably always been unusual, and a little hard to believe, even for the ancient people who wrote down our Bible stories. When my kids hear a snippet of the news and learn of fires that kill families or children who are abducted, and they get scared, I remind them that the reason these events make the news is that they are unusual. Perhaps the same is true for the obvious miracles and interventions in the Bible—they were so unusual that they merited writing down. Perhaps it's not that ancient people had more direct access to God, but that only the most miraculous, most obvious interventions deserved retelling and eventually, writing down. Likewise, Louis Zamperini's life—from his unlikely Olympic run and even more unlikely survival to the miracles that seem to have saved him—is so unusual that it needed to be written down and shared.

I believe that God is always working in our lives. I believe that God is always bestowing on us quiet daily miracles—the reawakening of the earth in springtime after a frigid winter, or an alcoholic making it through one more day without a drink despite having cravings—that are far more prevalent than the obvious kind of miracles that Zamperini experienced. I don't know or understand why most of us never experience a voice from heaven or other clear intervention from God, or why a few people do. But I know that reading about those moments when God seems to make himself known in the world in an unequivocal way, whether in a Bible story or an account of a modern person like Louis Zamperini, revives my faith in both God and the idea that God is always nudging us forward toward life and goodness and love.

Do you believe that God can intervene in the world to make miracles happen? Have you ever had something happen to you that you believe was a miracle or some kind of direct intervention from God?