Home > Blog > Into the Fire: Jesus the Thief? 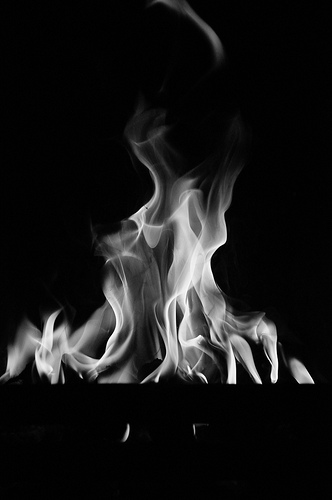 Ancient rabbis spoke of scripture (the Torah, specifically) as black fire on white fire, both of which beg interpretation if anything resembling and understanding of God’s instruction (Torah, literally) is to be reached. God gave them the Torah without vowel marks or punctuation, making one absolute literal translation completely impossible. As a mentor of mine, the Rev. Ken Howard writes, “Since God does not make mistakes, God must intend for us to bring our creativity and imagination to the task of reading and interpreting Scripture.” Read about Midrash here.

We don’t know who wrote the letter to the Hebrews, so we’ll call the author “Pat.” Pat writes about faith, calling it the assurance of things hope for and the conviction of things not seen, by which we understand that everything visible was made from things that are invisible. Using the example of Abraham from Genesis, Pat describes how faith helped Abraham obey God, endure life as a foreigner, and make babies with Sarah (and Hagar…the poor thing deserves some mention). Abraham’s descendants died without reaching the “promised land,” but they spoke in a way that made it clear that this earth is foreign land. Pat writes that people who speak this way also make it clear that they seek a homeland and that God has prepared a city for them.

Which is it God? A country? A city? Something else?

If God has prepared for us a heavenly place that will be our homeland, we have to wonder when we will be able to book our tickets. Pat’s faith seems to be belief in a dream of a better place. We are told to somehow believe in this place without any hard evidence. The city whose foundations are built by God is a nice idea, but it doesn’t help us function in the meantime. Unless we refocus on the process of sojourning as the way in which we live our lives. If Pat’s goal is to instruct the Hebrews in living life, maybe Abraham’s example is one of process—not final product. What would it look like if we approached life as foreigners—even tourists—noticing beauty that the locals forgot about long ago and seeking each new adventure for the sake of the experience?

Jesus assures the crowd that it is their Father’s pleasure to give them the kingdom. He tells them to sell their possessions and give alms, and to make unfailing treasure in heaven. “For where your treasure is, there your heart will be also.” He says to be like those waiting for their master to return so that they will be ready to open the door and let him in when the knock comes. Finally Jesus says that if the owner of the house had known at what hour the thief was coming, he would not have let his house be broken into; they must also be ready when the Son of Man comes at an unexpected hour.

Could Jesus possibly be adding confusion to this lesson on purpose? By mixing metaphors his message of readiness gets muddled by the blurry details. Of course the whole point seems to be that we will be caught off-guard by the coming of the Son of Man. Maybe that is the point. Maybe Jesus is lighting a fire under their feat so that they act now, instead of later. It’s like when you are a student and you have a paper due in a month. You don’t start the paper now, knowing that you don’t have to have it started for at least three weeks; you get started with just enough time left before the due date to finish it. Jesus doesn’t want us to act in this way when it comes to seeking to be with God; Jesus wants us to be ready for God whenever and however God arrives.

Just as you stay at home between 8 a.m. and 3 p.m. in case the cable man should come, be ready for the unexpected hour when the Son of Man pops into your living room. Be ready by being present, for God is everywhere.