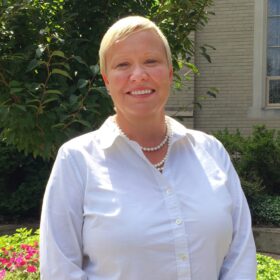 Mrs. Priscilla Hooper moved to West Hartford in 2002 when her husband, Bob, was named rector of St. James's. She has worked as the Director of Religious Education (now called Director of Family Ministries) since 2003. Priscilla is the mother of three grown children—Robby, Henry and Maddy and mother of two four legged children, a yellow lab named Lilly, and a chocolate lab, Theo. In addition to her work at St. James's, she is a library paraprofessional at Morley School part-time. She has a bachelor's degree in journalism from the University of Texas at Austin and has dedicated her life to children and families.