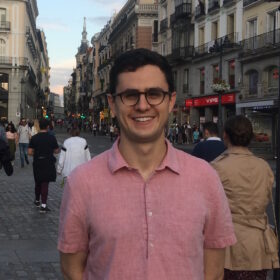 Tim is originally from Greenwich, Connecticut and grew up with a Jewish mother and an Irish-Catholic father. Seeking to learn more about these two traditions after graduating from Princeton, Tim spent two years studying the Hebrew Bible in Stockholm, Sweden and the New Testament at the University of Oxford. After these two years of study, a job in politics and also education, Tim began an MDiv at Yale Divinity School in order to explore a vocation to the priesthood in the Episcopal Church. With the generous support of St. Paul's on the Green in Norwalk, Connecticut, he entered the ordination process in the fall of 2017. Tim loves the wisdom of the early Church Mothers and Fathers, and also loves to cook, travel, listen to jazz, and see any kind of theater. His partner Phoenix is currently a student in the Masters in Religion (MAR) program at Yale Divinity School and studies Medieval Liturgy and Drama. Tim is excited to be a member of the St. James's community!

All Sermons by The Reverend Timothy R. O'Leary