Home > Blog > Praying for Syria (& Not Knowing What Else to Do)

In January 1991, in the weeks before the first Gulf War, I walked the three-plus miles from the Washington National Cathedral in D.C. down to the White House, along with hundreds of other Christians praying, hoping, and marching for peace instead of bombs. That cold, dark walk, step after increasingly aching step, was perhaps the most authentic and heartfelt prayer I have ever prayed, although I spoke no words (well, other than the occasional comment or wish for a hot cup of coffee directed at the friends who marched with me). With each step, I and those with whom I walked asked (begged, pleaded with) God to help us find and take a different path—one other than bombs—in response to Iraq's invasion of Kuwait. You could argue that our prayers went unheard, I suppose. Not long after the walk for peace, my housemates and I huddled silently before the TV, trying to make sense of images of reporters on Iraqi rooftops, eerie flashes of colored light mute testament to the bombing campaign begun. But I have never, before or since, been so completely sure of the connection between my heart (and head and feet) and God's. 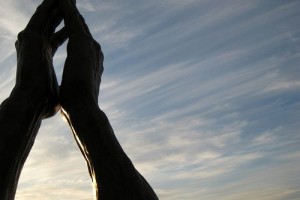 I am thinking of that walk, and also of the tense months in early 2003 when the news was dominated by talk of WMDs and pre-emption, as I read today's news about Syria, chemical weapons, and potential U.S. missile strikes. Once again, all I feel able to do is pray. Once again, prayer seems both the most powerful thing I can do and also utterly, terribly inadequate.

I don't know the right way for us to respond, if we respond at all, to the atrocities that Syria's dictatorial government is inflicting on its people. I don't know what is right in a moral and ethical sense, nor what is right in a efficacious sense—what would actually foster greater peace and security in Syria in the short term. Jesus seems clear in his critique of redemptive violence (the idea that violence can right wrongs); in the Gospel message (and in real life) responding to violence with violence often just leads to more violence, not peace. And yet Jesus was not passive, either. He called his followers (calls us) to care for the suffering and oppressed. In light of such a call, how can we stand by and do nothing as people—including babies and children—are murdered by their government? We can't. We shouldn't. But what should we do?

Oh, but this is an uncomfortable place to be, this place of uncertainty, where we are confronted with the grave suffering of God's beloved children and want to do something but suspect that there is absolutely nothing we can do to make it better, now. On the smaller stage of personal interactions rather than geopolitics, we Christians tend to botch things quite handily when we find ourselves in such a difficult, uncomfortable place. When those we care about are suffering (through chronic or acute illness, relationship discord or divorce, raw and bloody grief) we pull out those awful cliches, found nowhere in Scripture, horrid cocktails of terrible theology mixed with inept pastoral care: "Everything happens for a reason," "God won't give you more than you can handle," "God will surely teach you lots through this experience." Baloney, all of it. What people in pain most need is not explanations or platitudes but simple presence and absolute acceptance (which, in turns out, are precisely what God consistently offers to us—God's ever-presence, God's absolute and unquestioning love and acceptance).

This sort of ministry, of presence and love and acceptance, is hard enough to practice on a personal level. It seems downright impossible, foolish and useless, in the face of government atrocities and systemic oppression. And yet, in some fundamental sense, I think it remains the most important thing we can give to Syria's people right now—to be present, not to look away in either horror or helplessness, saying it's not our business, not our problem. (An acquaintance wrote on Facebook a few days ago, "I can't handle any more news about the babies and children in Syria!" To which someone else replied, "How do you think the Syrians feel?") And as we hold the people of Syria in our hearts, as we read the news and watch the reports on TV, we can pray, believing that is one of the most powerful things we can do even as it feels utterly, terribly inadequate. That doesn't, of course, answer the question of what the U.S. can and should do in Syria. That's a question I won't even attempt to answer (mostly because I don't know, and also because arguing a political stance on a church blog would probably get me in trouble), but here are some things I've been reading and thinking about:

Even so, come, Lord Jesus.

O God, by whom the meek are guided in judgment, and light rises up in darkness for the godly: Grant us, in all our doubts and uncertainties, the grace to ask what you would have us to do, that the Spirit of wisdom may save us from all false choices, and that in your light we may see light, and in your straight path may not stumble; through Jesus Christ our Lord. Amen.